Expert Says Gold Could Climb to $10,000 Due to Threat of War 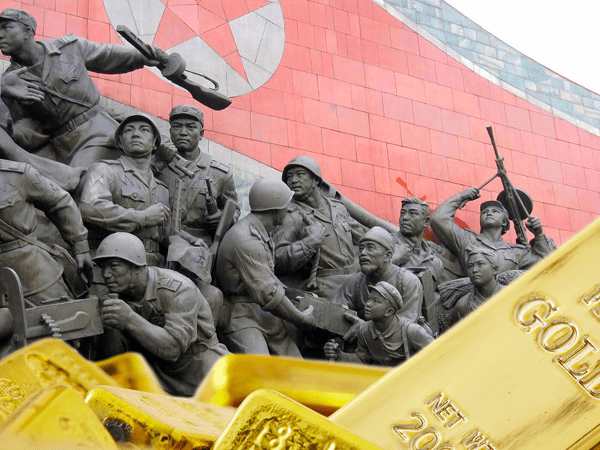 This week, Your News to Know rounds up the latest news stories involving gold and the overall economy. Stories include: Expert says gold could climb to $10,000 due to threat of war, analyst expects gold to vault over from $1,300 to $1,400, and Trump’s tariff hunger is bullish for gold.

James Rickards: Gold prices could surge to $10,000 because “war is coming”

Author James Rickards sees global political instability propelling gold to as high as $10,000. He says one of the key drivers behind this rally will be the conflict with North Korea, the threat of which isn’t being taken seriously enough.

“People seem to have very short attention spans. I’m just looking down the road and you can see the war is coming,” he said.

“The bigger picture, the one I’m looking at, is that gold hit an interim low on Dec. 15 and it has been grinding higher ever since. It’s one of the best performing assets of 2017.”

Rickards’ forecast comes after North Korea performed its most powerful nuclear test yet last Sunday, one which allegedly involved an advanced hydrogen bomb and provoked a response from the U.S. military.

The move also prompted a flock to gold, letting the metal reach its highest in nearly a year. Sean Callow, a senior forex strategist at Westpac, believes there is more room for investors to load up on gold, while Tom Kendall, head of precious metals strategy at ICBC Standard Bank, says gold could rally further.

“We’ve got the geopolitics and we’ve also got a fairly benign interest rate environment. There’s still nothing threatening coming out of the Fed recently,” said Kendall.

The next round of tensions is expected to come after Trump’s push for further sanctions on Chinese banks due to their involvement with North Korea. Newsmax editor Andrew Packer says this will be the catalyst behind the next gold rally which could pass $1,500, as China would likely respond to sanctions by weakening the U.S. currency.

Bloomberg Intelligence’s Mike McGlone updated his accurate prediction that gold would reach $1,300 in August by listing $1,400 as the next level that the yellow metal looks ready to break.

“Unless the dollar suddenly shifts to sustained strength and the CBOE Volatility Index (VIX) plunges, gold should have few options but to continue higher,” said McGlone, who is also bullish on silver, stating that the latter is supported by both a weak dollar and strong industrial metals.

“Unchanged vs. more than a year ago, and nearing 2016 highs, gold and most precious metals appear ripe to resume a bull market. What was $1,300 gold resistance should be support now, as silver threatens to break out of its narrowest 52-week range since 2014,” he said.

As shown in Kitco, McGlone explained that factors such as tensions with North Korea, uncertainty surrounding the Federal Reserve and the possibility of a “peak dollar” far outweigh the negatives that could hold the metal down, as evidenced by its recent spike above $1,350 an ounce.

After threats that the Trump administration will pull back from a trade deal with South Korea, as well as a leak that quoted the President calling for tariffs to his senior staff, his trade agenda is becoming clearer.

Trump’s protectionism is very bullish on gold for a variety of reasons. Tariffs will limit imports to and exports from America, lowering the dollar’s purchasing power and increasing prices on goods within U.S. borders. This will lead to the government factoring in higher costs into inflation statistics, making inflation seem higher than it really is and making gold look more appealing.

Tariffs could provoke other countries into retaliating, whether by further limiting the amount of U.S. imports and exports or by the sell-off of U.S. Treasuries. The latter would push interest rates higher and force the Federal Reserve to print more money in order to keep rates within their target range, sinking the greenback which has already fallen sharply after Trump’s election.

Oil tariffs are another source of concern – while Trump hasn’t spoken much of them so far, he’s a prominent detractor of OPEC and might look to limit oil imports to the country. Regardless of the severity and scope of Trump’s tariffs, all of them have something in common: since they revolve around lowering imports into the U.S. and increasing the dollar supply, they’re sure to support gold.