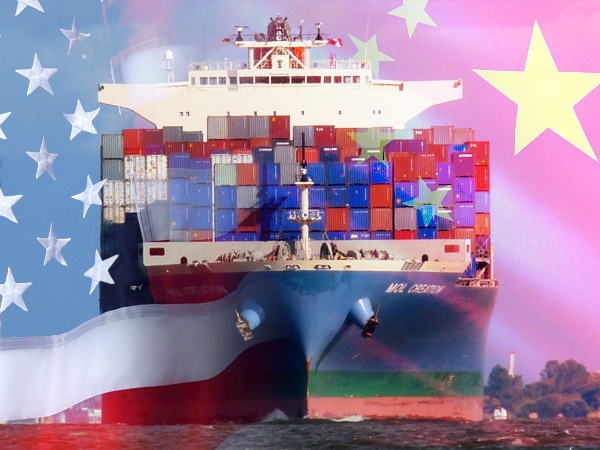 A “tit for tat” trade war between China and the U.S. may be escalating.

At a recent meeting at the Center for Strategic and International Studies (CSIS), the discussion was wide-ranging and included the possibility of armed conflict, according to a report at the South China Morning Post (SCMP):

Reflecting the enormity of the subject, discussions at the Centre for Strategic and International Studies ranged widely, from the possibility of armed conflict between the world’s two largest economic powers to sentimental accounts of personal contacts.

Plus, with China beginning to threaten the U.S. on the world stage, according to the SCMP, an idea known as the “Thucydides Trap” continues to gain traction:

It seems that no debate about US-China relations these days is complete without references to the Thucydides Trap – the theory that direct military conflict is often likely when an emergent national power’s influence threatens that of the incumbent top dog – and author Graham Allison’s book about how China’s rise has all the markings of historical scenarios that led to war.

Looks like China and the U.S. won’t be finding common ground anytime soon.

Trade alone hardly moves the economic “big picture,” but if China and the U.S. don’t find a way to move forward soon, growth could slow down on a global scale.

And according to CNBC, the news isn’t good…

U.S. Treasury Secretary Steve Mnuchin and Chinese Vice Premier Lieu He are leading their respective delegations in China, but a breakthrough deal is viewed as highly unlikely.

It looks as if the path to some sort of common ground will be a long one. If consumers spend less and firms stop investment, the outlook could be dire.

And as you can see by the graph below, both the U.S. and China are heavily vested in moving things forward in these trade disputes: 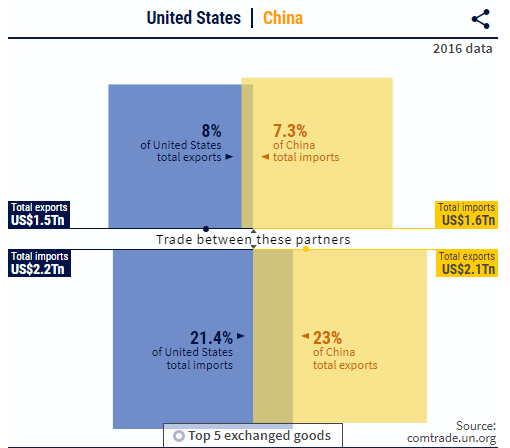 But the trade “gears” come grinding to a halt when it comes to the demands each side has, which seem to be creating a barrier to getting things done.

For example, according to the SCMP, the U.S. wants China to reduce a $200 billion deficit, while China wants the U.S. to remove important restrictions on high-tech exports, among a number of other demands.

This in turn creates more trade friction, which according to another CNBC report could mean escalation that neither side wants:

U.S. Treasury Secretary Steven Mnuchin and Chinese Vice Premier Liu He are leading talks in Washington on Thursday and Friday aimed at heading off a trade war between the world’s two biggest economies.

“We do not want to see the escalation of the trade frictions between China and the U.S.,” Gao said at a weekly briefing. “Of course, we are also prepared for all possibilities.”

Preparing for “all possibilities,” including military action, adds more uncertainty to an already uncertain economic picture, including the weakening of the U.S. dollar.

But While U.S. Suffers, China and Australia Might Celebrate

If the trade war does escalate, President Xi Jinping thinks China is more resilient than the U.S., and could come out on top. On SCMP they reported (emphasis ours):

President Xi Jinping has told the British ambassador to China that the Communist Party has “the levers and the country had the resilience” to come out of a trade war in better shape than the United States.

But China might not be the only country to “come out on top” (even though no country truly “wins” a trade war).

It looks as though Australia could possibly increase its wine, fruit, nuts, steel, and aluminum exports if things go the right way.

And by the looks of it, they may already be in a position to benefit from U.S. tariffs. According to a NPR report by Scott Neuman…

With the U.S. imposing a 25 percent tariff on steel imports from China, Beijing might well decide to source more of its met coal from somewhere else.

Australia seems most likely to gain.

So if China finds any more sources outside of the U.S. for other goods, who knows what can happen as trade tensions escalate.

Don’t Let Trade Wars Eat Away at Your Retirement

While a trade war might not hurt China too much, it’s not safe to assume the same for the U.S. A trade war would likely hurt the U.S. economy – and your retirement as an indirect result.

When protectionist trade policies start backfiring, you don’t want to let your portfolio become collateral damage. Instead, start taking the necessary actions to protect yourself and your future. Consider moving into assets such as physical precious metals that are known for their protection and security during times of political and economic uncertainty.