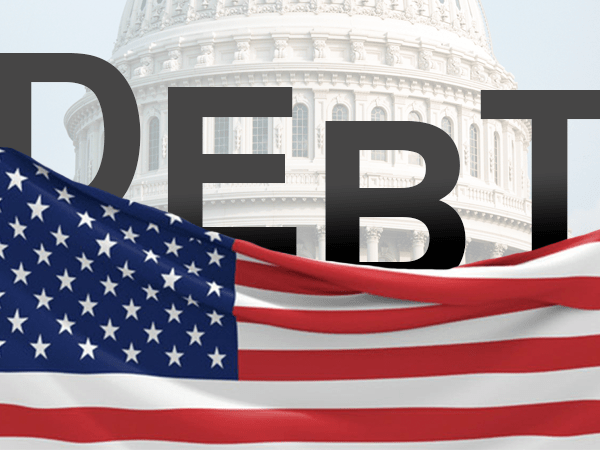 Discord among Congress and the Trump Administration over the debt ceiling is about to come to a head. And it’s quite possible that the outcome will be downright bad for the American public.

As we discussed earlier this month, two of Trump’s cabinet members — Steven Mnuchin (Secretary of the Treasury) and Mick Mulvaney (director of the Office of Budget and Management) — are going head-to-head on the country’s debt ceiling.

To complicate matters further, now Congress is divided on the issue as well.

Let’s discuss what the dispute is all about, and what impact it could soon have on the economy.

Essentially, the debt ceiling is the amount of debt the U.S. guarantees to pay. But it’s not just about new spending. Compounding interest on existing debt, plus spending approved by Congress in previous years (but are only now starting to take effect), is more than enough to require the ceiling to be raised.

But speaking of new spending… Trump’s ambitious plans to cut taxes, build a border wall, and invest heavily in infrastructure rely entirely on the debt ceiling being raised.

All the fabulous deals [Trump] wants to do—cutting taxes, building a wall, dramatically expanding the military budget, not touching major entitlements—will require the issuance of massive amounts of debt. And he can’t accomplish any of them until the debt ceiling is raised. Worse, any of the goodies will have to be preceded by an unpopular piece of legislation that will increase the national debt significantly—requiring the cooperation of the same conservative Republicans who are currently giving Trump an ulcer over health care reform.

So what happens if we break through the ceiling?

If the U.S. debt burden surpasses the ceiling before Congress acts, there is a very short series of “extraordinary measures” the Treasury Department must use to keep the country from defaulting on its debt.

The simplest way to explain it is this: Once the debt ceiling expires, the Treasury is forced to — more or less — dip into the government piggy bank to keep the U.S. in good standing.

Congress can still act to raise the ceiling before anything catastrophic happens.

If they wait too long and the Treasury runs out of “extraordinary measures,” things start getting ugly very fast.

We got close to that breaking point back in 2011, when Congress dug in its heels and the U.S. got knocked with its first credit downgrade in history.

The debt ceiling technically expired on March 16. Since then, the Treasury has been spending upwards of $2 billion per day as part of those “extraordinary measures” to service the country’s debt.

Here’s the real catch: The Treasury only has about $189 billion left to keep things afloat. Meaning that we only have about 90 days before our government is out of money.

If Congress doesn’t act to raise the ceiling soon — like Treasury Secretary Steven Mnuchin urged in a letter to House Speaker Paul Ryan earlier this month — the U.S. could find itself in another situation where its creditworthiness (and economic safety) is at-risk.

And with the divisive nature of the Republican Party, primarily the Tea Party wing and its aversion to anything even remotely related to federal debt, it’s highly probable that we get dangerously close to the edge yet again.

Remember how we said the U.S. went through its first credit rating downgrade after the last serious debt ceiling crisis in 2011? The event went down as an unfortunate but instructive lesson on the consequences of putting politics ahead of good policy.

But evidently the memory of the average politician or bureaucrat is shorter than we thought, because it seems history is repeating itself.

With about 90 days to resolve the issue, Congress is playing with fire. And the consequences might not be as minimal as a credit downgrade this time (although the country’s creditworthiness is vital to our economy).

Instead of a downgrade, there’s a frightening chance of an outright default, a completely unprecedented scenario in the country’s history.

In an ideal world, all sides would come together and not play politics with the debt ceiling again. Clearly that’s not the world in which we live. America’s partisan divide may now be so wide that a default will occur. That isn’t my base case scenario, but we will probably come down to the wire.

If Congress delays raising the debt ceiling, as it has done to great detriment before, there will still be one major benefit to offset the damaging consequences.

If another credit downgrade occurs (or something worse), the dollar will more than likely crash. It certainly did back in 2011 — the last time we went down this road. In fact, as a result of the last major debt ceiling crisis, the dollar sunk to its lowest point since 2008 after the subprime mortgage crisis.

But when the dollar falls so sharply, something good happens to individuals holding gold.

You see, gold is priced in dollars. Based on how much the dollar is worth, it takes a certain number of dollars to buy an ounce of gold. That will never change, no matter the paper currency in use.

Therefore, when the dollar crashes, more dollars are required to buy that same ounce of gold. Suddenly, gold prices erupt as a result of simple economics and math.

If you’re especially confident in the federal government and its ability to stave off another debt ceiling meltdown, maybe you don’t need to make any changes with your savings. But if you have any doubt about how our bureaucrats will handle the coming crisis, today may be one of the best opportunities to buy gold.