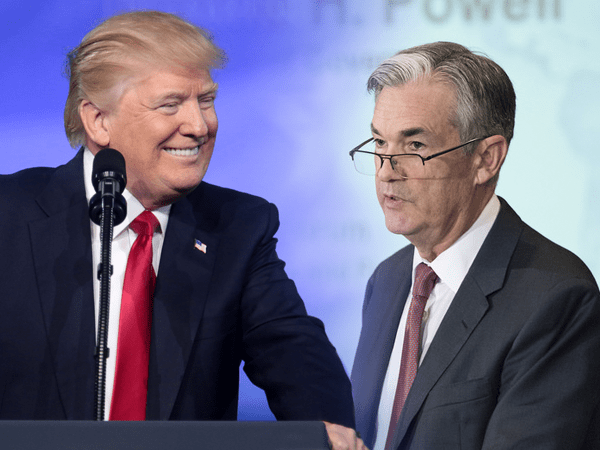 Current Fed Chair Janet Yellen’s term expires early next year, giving President Trump the unique opportunity to nominate somebody to take her place atop the world’s most powerful central bank.

So who will replace Yellen? Within the next few days, Trump is expected to nominate Jerome H. Powell, a man who has been a Fed governor since 2012.

Here’s what we know and how it could impact monetary policy in the months and years ahead.

Trump has praised Yellen in the past for her performance, so why is he taking the unusual action of replacing her after only one term?

“You like to make your own mark,” Trump said.

One wonders at Trump’s choice of words since it appears that Powell would not deviate much, if any, from Yellen. According to a NY Times article (emphasis ours):

Mr. Powell, by contrast, has voted for every Fed policy decision since 2012, although he expressed some reservations in internal debates about the extent of those efforts. In recent years, he has backed the methodical unwinding of the Fed’s stimulus campaign, which involved purchasing $4 trillion worth of Treasuries and mortgage-backed securities to help the economy recover from the 2008 financial crisis.

Fed officials are often labeled hawks if they favor higher interest rates to control inflation, or doves if they want to keep rates low to promote job growth. Richard Fisher, a former president of the Federal Reserve Bank of Dallas, who worked with Mr. Powell at the Fed, said Mr. Powell “is neither a hawk nor a dove.”

“I used to say that we all want to be wise owls,” he added, “and I think that he fits that category very well.”

Mr. Fisher said Mr. Powell was moderate to a fault. “I’ve tried to get him to drink more than two glasses of wine at dinner, and he will not do it,” he said.

A survey of 144 investors conducted by Evercore ISI found that they expected that Mr. Powell would push rates modestly higher than Ms. Yellen over time.

Clearly, it will be difficult for Powell to “make a mark” if he does not deviate from Yellen’s policy of slowly raising interest rates. But if he does raise rates faster — and unwinds the Fed’s balance sheet — it could have a big impact.

Powell could soon find himself in the position necessary to carry out this planned reduction.

The other front runner for the Fed Chair position has been John Taylor. According to the Telegraph:

The Republican favorite and more radical option of Stanford economist who was also shortlisted, John Taylor, would have resulted in a much greater shake-up of monetary policy, by much more rapidly tightening monetary policy and raising rates higher – according to the rule he invented and which bears his name.

By picking Powell over Taylor, it appears that any increases in interest rates could be slow and measured, similar to what we’ve seen over the last two years.

On the other hand, Trump might have preferred Taylor but chosen Powell because he is more likely to be approved. In which case, if history is any indication, it would not be surprising to see Trump exert influence on Powell (and the Fed) via Twitter.

So with Powell taking over the Federal Reserve, will we just see more of the same? Or will Powell make big changes once he has officially taken over the Fed chair position? At this point, no one can tell, but it will definitely be something you’ll want to watch carefully.

In the short term, the new Fed Chair will have more of a psychological effect than anything. By nominating Powell, Trump sends a message to Wall Street that the Fed will continue policies that are favorable to the stock market.

In the long term, the Fed could move faster than Yellen to raise rates and shrink the balance sheet — both of which could put the squeeze on an already fragile economy.

But regardless of what happens, it’s important to remember that the Fed lacks the tools needed to deal with any kind of serious economic shocks that may happen now or in the near future.

Which is why you should be prepared for anything. And physical precious metals like gold and silver are a wise choice for protecting your wealth from the inevitable uncertainty caused by a new Fed Chair.