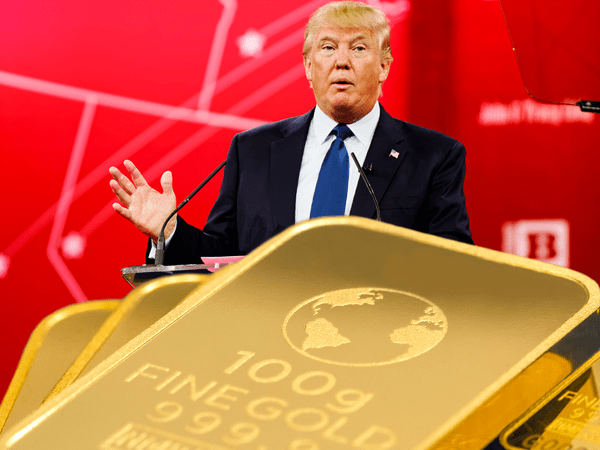 This week, Your News to Know brings you the latest stories involving gold and the overall economy. Stories include: Gold rallies as Trump’s in-office hardships batter the dollar, gold’s safe haven status refreshed amid Trump-fueled turmoil in stocks, and India is working with the World Gold Council to create a spot exchange.

Gold climbed last week on the back of turmoil surrounding the Donald Trump administration, reaching a two-week high of $1,248 and pushing its gain this year to 8.6%. This follows President Trumps’ firing of FBI Director James Comey after reportedly urging him to drop an investigation into a former National Security Adviser, raising concerns that the president may have obstructed justice.

There is also the controversy of Trump leaking U.S. intelligence to Russia which has made many wonder about the possibility of a Trump impeachment. Naeem Aslam, chief market analyst in London at Think Markets U.K. Ltd., said that the mere notion of an impeachment becoming reality would massively erode investor confidence, adding that Trump “perhaps is facing his toughest time in the office.”

The situation prompted references to the 1970s Watergate scandal, which caused then-president Richard Nixon to resign. “It’s a political dogfight,” said Ole Hansen, head of commodities strategy at Saxo Bank A/S in Copenhagen. “That does mean that his ability to act as a president, and to do what he’s promised, is sharply reduced and in that lies the risk of dollar weakness.”

While Hansen isn’t ready to draw comparisons to Watergate yet and doesn’t believe the current sum of events could lead to a removal, he still acknowledged that the issues, which have so far hurt both the dollar and European stocks, are drawing the administration’s focus away from policies and hampering the White House’s ability to deliver on promises.

The ongoing disarray in the White House has restored gold’s safe-haven appeal, allowing the metal to post its biggest gain since June 2016. The metal also benefited from the dollar trading near its lowest since November as well as investors scaling back on equities.

“People are now worried that he may get impeached,” said Brian Lan, managing director of Singapore-based GoldSilver Central Pte, in regards to Trump. “So safe-haven assets are now back in.” Lan pointed out that the metal clearing the $1,270 level could potentially send gold towards $1,300 an ounce, acknowledging the importance of news flow in the metal’s rise.

Although the White House has denied former FBI director James Comey’s version of the story, there are concerns that the administration won’t be able to implement its economic agenda. “The ongoing political uncertainty is likely to keep upward pressure on gold,” said Australia & New Zealand Banking Group Ltd., while noting that expectations of a June hike have receded. “Uncertainty over the Trump administration’s ability to stay focused and effectively carry out its planned economic program rose sharply overnight, and this was reflected in a flight to safe-haven assets.”

The World Gold Council (WGC) has teamed up with the Indian government to create a physical spot-gold exchange that would significantly improve trade in the country. The plans still face several political and logistical hurdles, but the project could go live as soon as next year.

“We are working on a gold exchange for India,” said P.R. Somasundaram, managing director for the WGC in India. “The finance ministry has formed a gold committee. And the committee has taken this as one of the things to do.”

According to Somasundaram, the exchange would bring more order and structure to the market, “which is what the government would love.”

“It is not going to be a gold exchange like you see here, with bullion banks backing liquidity, it’s going to be very different,” he added.

This is the latest in a series of gold exchange overhauls around the world as multiple countries look to improve their system for trading with the yellow metal, which is rising for a second year amid growing demand from China and a weaker U.S. dollar.