Big Banks Report Their Ultra-Wealthy Clients Are Rushing Into Gold 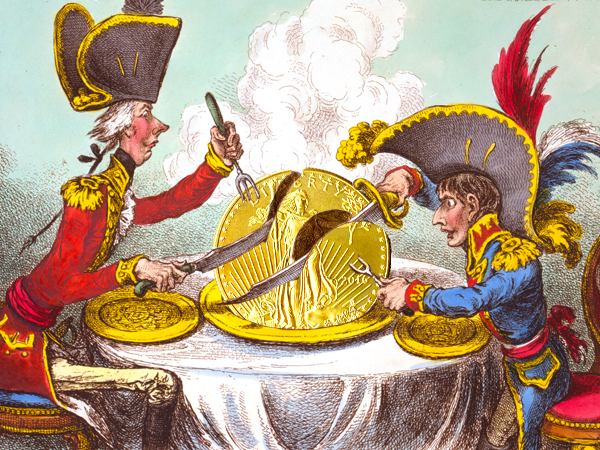 This week, Your News to Know rounds up the latest top stories involving gold and the overall economy. Stories include: The ultra-wealthy aren’t sold on the stock market recovery, Powell’s dovishness boosts gold prices, and Goldman rolls out yet another optimistic forecast for gold.

Reuters recently spoke to representatives of nine big banks, which manage around $6 trillion of wealth for the world’s ultra-rich. And, in stark contrast to the action in the stock market, gold appears to be the asset of choice for both money managers and the clients themselves.

Of the banks that provided a forecast for gold prices, all four are calling for higher prices by the end of the year. Additionally, all nine have recommended and adjusted to a portfolio allocation of up to 10%. The respondents cited gold’s ability to shield investors against both inflation and deflation, as well as a variety of other downturns, as the main reason for rebalancing. As Lisa Shalett, Chief Investment Officer of Wealth Management at Morgan Stanley noted, the bank’s clients hardly needed convincing, sharing that Morgan Stanley’s wealthy clients, with decades of experience in investment, were particularly keen to hedge their bets with gold.

Representatives of UBS, Wells Fargo Investment Institute and JPMorgan Private Bank’s United Kingdom and Ireland branch likewise stated that client interest in the metal has increased exponentially over the past few months. Andre Portelli, co-head of investments at Barclays Private Bank, pointed out that the supply glut caused by the pandemic made his bank’s clients favor bullion over other options.

In terms of forecasts, JPMorgan’s Oliver Gregson sees $1,750 as a likely target for gold by the end of the year. UBS is slightly more bullish on the metal with a year-end target of $1,800, adding that a return of coronavirus-related issues could bring the metal to $2,000.

While market sentiment is determined by various things, the Federal Reserve’s statements and minutes from their meetings are often among the primary things traders look out for to gauge their next step. With this in mind, it should come as no surprise that gold prices spiked immediately after Fed Chair Jerome Powell issued a speech that was all but free of optimism. In a video conference with the Senate Banking Committee, Powell reiterated the previously-stated likelihood that interest rates would stay near zero for the foreseeable future, along with expressing concerns over the economic recovery moving forward.

Despite the strength of the stimulus, Powell’s dovishness was on display as the Chair noted that economic output and employment are still heavily behind pre-pandemic levels, which were disappointing to begin with. Despite some positive retail and industrial data, market participants have taken note of reports that virus cases are rising in the U.S. as well as China.

A slew of geopolitical tensions, with India and North Korea militarizing troops against China and South Korea, respectively, has likewise made investors wary over developments in the near-future. An equally strong driver for gold has been the seemingly never-ending stimulus, which includes President Trump’s $1 trillion plan to bolster U.S. infrastructure and the Fed’s decision to start buying corporate bonds along with a new lending program.

“Every time the price falls, it seems that investors are seeing it as a buying opportunity more than time for further selling,” said Carlo Alberto De Casa, chief analyst at ActivTrades, in a note addressing gold’s price movements.

Having made several upgrades to their gold forecast over the past months and sharing a bullish view even before the pandemic, Goldman Sachs has once again raised their target for gold’s price to the highest level so far. In a note published earlier this month, Goldman’s team of analysts raised their gold price forecasts for the three-month, six-month and 12-month ranges.

The analysts elaborated on their optimistic predictions, citing a persistent environment of low interest rates and growing concerns over currency debasement as the primary drivers for gold’s price over the coming months. Goldman said that a move above the Federal Reserve’s targeted inflation rate of 2%, paired with a lack of appropriate policy response from the central bank, could send gold prices past $2,000.

Goldman’s analysts are even more bullish on silver, raising their 12-month forecast for the metal to $22, a 47% increase over the previous forecast of $15 for the period. The team said that global monetary stimulus should significantly increase demand for silver from the industrial sector.