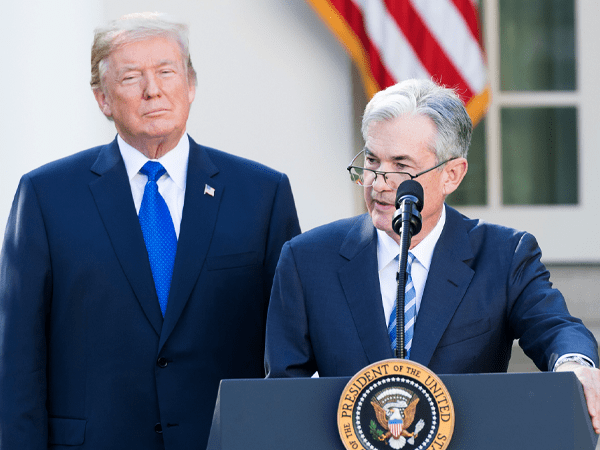 Photo by The White House | CC BY | Resized

On Tuesday, POTUS took to Twitter and called for the Fed to cut rates by 1%, pointing to 3.2% GDP growth and “wonderfully low inflation.”

China is adding great stimulus to its economy while at the same time keeping interest rates low. Our Federal Reserve has incessantly lifted interest rates, even though inflation is very low, and instituted a very big dose of quantitative tightening. We have the potential to go…

….up like a rocket if we did some lowering of rates, like one point, and some quantitative easing. Yes, we are doing very well at 3.2% GDP, but with our wonderfully low inflation, we could be setting major records &, at the same time, make our National Debt start to look small!

However, it’s hard to say if inflation is as “wonderfully low” as POTUS claims.

After all, official sources saw CPI inflation jump to 1.9%, with rapidly rising food prices reported as the leading cause. Plus, the “growing” economy POTUS alludes to appears to have topped out since January 2018 (see red arrow in the chart below – source): 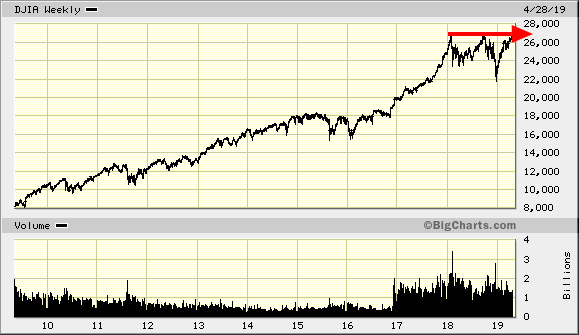 Additionally, according to an official source, a 3.2% or higher GDP growth rate has happened on 3 different occasions before POTUS took office. The same source also reports that GDP Growth Rate in the United States averaged 3.22 percent from 1947 until 2019. So really, current GDP growth only appears to be on par with the average.

White House officials including POTUS and top economic advisor Larry Kudlow have recommended the Fed cut rates by half a point in the past. Despite all the information above, CNBC reports that, with his 1% cut recommendation, POTUS has “doubled down” on this approach.

Something important to note – according to CNN, a cut of 100 basis points in a developed world doesn’t “just happen”:

That’s just the point. Central banks in the developed world don’t tend to slash interest rates by a magnitude like 100 basis points just to stimulate some additional growth — it takes a crisis to perform an emergency cut of that magnitude.

In addition to all this, POTUS also made a second request for more quantitative easing (QE).

According to CNBC, the Fed already printed money three times during and after the financial crisis to prop up the U.S. economy. And right now, it doesn’t appear like the Fed will be going down that road again considering they’re right in the middle of a huge balance sheet runoff (on autopilot until September).

However, that doesn’t eliminate the possibility of more “tinkering with” the U.S. economy.

In their most recent FOMC meeting, the Fed voted to hold rates steady between 2.25%-2.5%. Chairman Powell’s remarks on rates were summarized at CNBC:

Powell said Wednesday that recently low inflation pressures may just be “transitory,” hinting that a rate cut may not be on the horizon, which disappoint traders. Powell’s comments sparked a sharp sell-off in the previous session, with the Dow closing more than 150 points lower.

The same CNBC piece highlighted a “less than 50% chance” of lowering rates. In fact, there is still at least one more potential rate hike left toward the end of 2019, according to S&P Global Ratings.

But that’s not all. In an effort to find more ways to runoff their balance sheet without disrupting the market, another CNBC piece revealed the Fed is also discussing a new program that appears much like a reinvented form of QE:

Federal Reserve officials are considering a new program that would allow banks to exchange Treasurys for reserves, a move aimed at ensuring liquidity during difficult times that also would help the central bank decrease the size of its nearly $4 trillion balance sheet.

Critics of this new idea “think it in essence could be a repackaged form of quantitative easing and thus yet another iteration of the Fed’s decadelong tinkering in financial markets,” according to the same CNBC piece.

While the Fed “Tinkers,” Strengthen Your Portfolio

Between the Fed “tinkering” with monetary policy, and POTUS attempting to “encourage” the outcome, now more than ever you should be thinking of how to protect your portfolio.

With so much uncertainty on the horizon, it would be wise to re-examine your retirement plan. This includes considering diversifying into different asset classes and risk levels.

Physical precious metals such as gold and silver are historically known to do well in uncertain markets. They can add protection to your portfolio, and help you maintain control of your retirement. While the future of monetary policy is uncertain, the future of your savings doesn’t have to be.