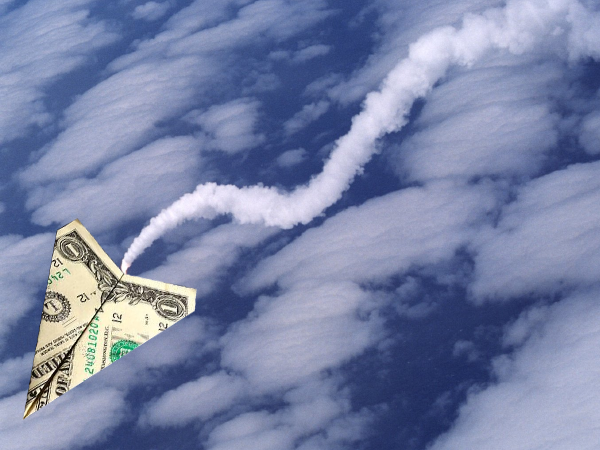 The U.S. dollar, the longstanding global reserve currency, has been struggling to regain the dominance it once had in the 1970s. At that time, it maintained more than 80% of the reserves.

After taking a huge hit in the 1980s and bottoming out at 46% of official reserves in 1991, it slowly clawed back some dominance.

But since the Euro arrived in the early 21st century, the dollar appears to be losing its grip again. Except this time, it may not regain its lost control of the currency market.

You can see the dollar’s latest slide down the global currency “slope” in the graph below (highlighted by the red arrow): 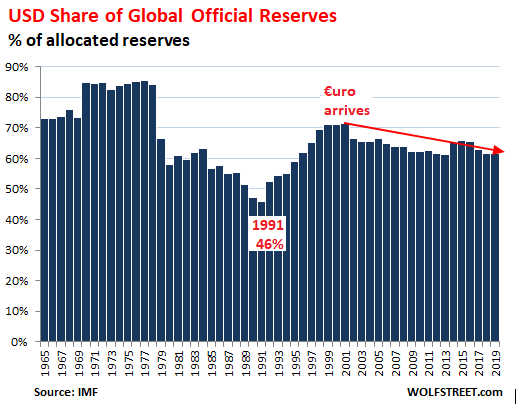 Wolf Richter says, “If the US dollar loses its hegemony as a global reserve currency, it would be a sea change globally, and specifically for the U.S. economy.”

Other Currencies Keep Chipping Away at U.S. Dollar Dominance

By controlling various payment systems, hyperinflation, and bank runs (among other things), the U.S. has been able to maintain currency dominance for decades.

But now it appears that time may be passing…

According to Agora Financial, quite a few more countries are entering the battle for currency-dominance:

More European Union countries are lining up to join INSTEX — an international payments network aimed at bypassing the U.S.-dominated SWIFT network from which Iran is effectively banned.

“Apart from the three countries that initiated the creation of the mechanism – France, Germany and Great Britain – eight more EU member states have decided to join. Two more countries are expected to follow in their footsteps,” says Nathalie Tocci, an aide to EU foreign minister Federica Mogherini.

Jim Rickards thinks these countries are only warming up, adding, “It is a beginning with far more pointed attacks on dollar hegemony yet to come.”

For example, Russia looks to be ditching the dollar so it can bypass potential currency sanctions in three key ways.

First, it’s reducing the number of dollar-based transactions. According to CNBC, since 2013, “The Central Bank of Russia (CBR) has been trying to reduce the number of transactions conducted in U.S. dollars, either for domestic payments or foreign trade.”

Second, Russia has created its own national bank payment system known as Mir, so it can continue operations despite sanctions by the U.S.

Finally, the same CNBC article notes, “It has also escalated efforts to sign currency swap agreements, which enables direct trade between two countries in local currencies, instead of the usual reliance on U.S. dollars.”

Other countries are also aiming to dethrone the dollar like Germany, Venezuela, Turkey, and a handful of smaller countries.

And they have the help of China, Saudi Arabia, and Russia, as they join forces to gain more control in the currency wars.

Granted, they have an uphill battle against the already-entrenched U.S. dollar. Who knows how it will play out? But when you chip away at even the largest stone block, eventually it can crumble.

Brace Your Retirement Portfolio for Impact

Despite any blind optimism that might be remaining, there are a host of countries that are trying to end the U.S. dollar’s dominance in global markets.

If the dollar can’t hang on as the dominant global reserve currency, it would have huge economic ripple effects.

This also means silver and gold prices could be positioned to “break out.” They both can do well as a hedge against a dollar in crisis.

No one knows exactly what will happen in the coming months. So get prepared in case things do end up going south.

global economy, us dollar, us economy