Home » Blog » U.S. Dollar On “Pins and Needles” as World Begins Turning Away

U.S. Dollar On “Pins and Needles” as World Begins Turning Away

Photo by Libershot.com | CC BY | Photoshopped

Historic changes in the world economic system don’t happen overnight. In fact, they can take decades.

One of those changes has been taking place since May 2014 – namely, the weakening of the U.S. dollar’s hegemony as the global reserve currency.

Agora Financial put it plainly in a recent issue of their 5-Minute Forecast, stating, “You don’t have to buy into imminent ‘collapse’ to know the rest of the world wants to get out from under the dollar’s thumb.”

The data backs this dire proclamation, as the dollar has lost more and more of its share of the global reserve every quarter except one since Q4 2016, according to the International Monetary Fund’s official report. (At the same time, the euro has been steadily gaining share.)

The most current data in Q2 2019 shows that the share of dollars held in reserve around the world has reduced to 61.63%: 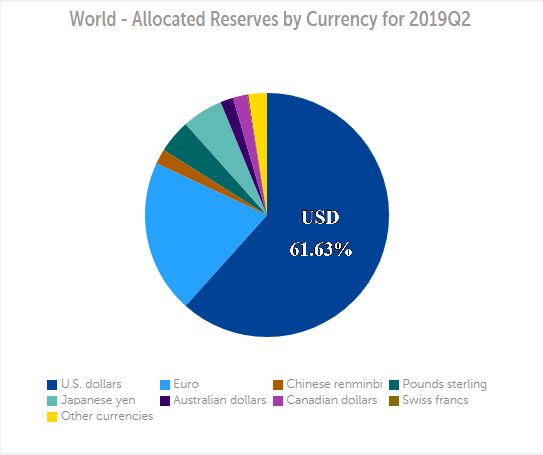 So the world is slowly turning away from the dollar, a sluggish process Agora calls “de-dollarization.” They claim this process has its origins in May 2014, “when Russian media described a ‘de-dollarization meeting’ among Russian and Chinese leaders.”

Since then, more countries have started taking part in the “de-dollarization” process, which has escalated thanks to economic sanctions the U.S. imposed in May 2018 to make sure the dollar “stays in power.”

The Lawfare blog reports that this escalation may have “incensed” these countries:

When President Trump withdrew from the JCPOA in May 2018, the United States not only reimposed on Iran sanctions that existed prior to the agreement but also added new sanctions. As Hilary Hurd noted on Lawfare, “An estimated 700 individuals, entities, and aircraft are now subject to U.S. sanctions, including over 300 targets not previously sanctioned and more than 50 Iranian banks and their foreign subsidiaries.”

But these countries may have found a workaround for these sanctions, one that presents a clear and present danger to the U.S. dollar hegemony.

“Strength in Numbers” May Make the Dollar Dance Nervously

The list of countries that want to dethrone the dollar includes, but isn’t limited to: “Russia, Iran, Venezuela, Cuba, Sudan, Zimbabwe, Myanmar, the Democratic Republic of the Congo, North Korea and […] also countries like China, Pakistan and Turkey, which are not under full sanctions but rather targets of other punitive economic measures.”

Individually, these countries wouldn’t stand a chance against the still-established dollar hegemony, but together they “equal America’s economic output,” according to Agora.

The European workaround being developed for these countries to bypass using the U.S. dollar in business transactions, while avoiding sanctions, is called INSTEX:

The Instrument in Support of Trade Exchanges (INSTEX) is European Special Purpose Vehicle (SPV), a legal entity created specifically to allow companies based in the European Union—and, in the future, potentially elsewhere—to continue to engage in business with Iran without running afoul of U.S. sanctions.

Germany has also called for an independent payment system, suggesting an alternative to the traditional SWIFT system just last year. France may also join the fray.

Granted, INSTEX still faces a number of hurdles in order to provide a robust alternative to SWIFT and usurp U.S. economic policy.

That said, according to Lawfare: “Even if INSTEX fails, it seems certain that the international desire for a dollar-independent payment system will only grow as the U.S. continues to expand its extraterritorial economic policies.”

Put simply, if the U.S. keeps pushing, this growing number of countries will continue finding new ways to push back.

And if the U.S. dollar ever loses its hegemony as global reserve currency, it could represent a monumental sea change for the U.S. economy.

As the dollar keeps weakening, at some point silver and gold prices could be positioned to “break out.”

For example, it happened in 2017, when gold rose to new heights as the dollar dropped after a simple Fed announcement.

Losing global hegemony will likely have way more impact on the dollar. Both silver and gold could perform well as a hedge against the dollar if foreign countries continue to move away from it.