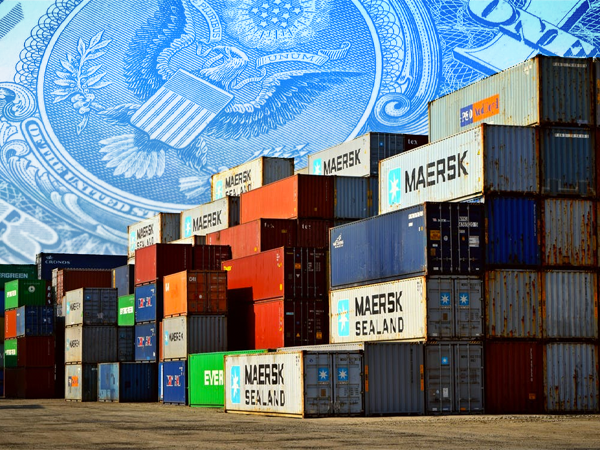 The overall U.S. trade deficit ballooned to a record level of $59.8 billion by the end of 2018, reaching the largest deficit since October 2008.

TradingEconomics.com explained that this gap widened in spite of “$250 billion in trade tariffs” placed on Chinese imports (see chart below): 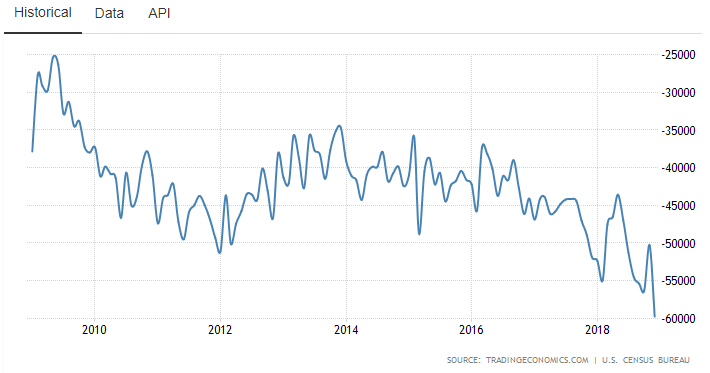 According to a CNBC piece, this record comes in way ahead of expectations:

Economists surveyed by Reuters had been looking for an increase to $57.3 billion, from November’s $50.3 billion, which was revised up $1 billion in the latest count.

In the past you could look to higher oil imports as a primary reason for these deficits. But at MarketWatch, a chart reveals oil’s impact is fading dramatically: 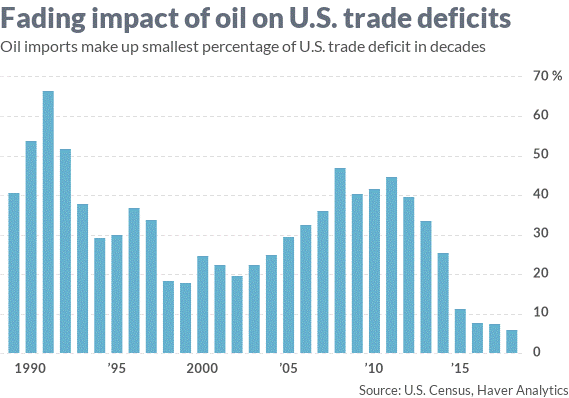 This “fading impact” of oil imports likely comes from the “shale” breakthrough in the U.S.

But at a time when economists hoped the “shale” would reduce trade deficit, this nation seems to have just switched one “vice” for another, and now imported goods are taking center stage, reports MarketWatch:

Those hopes have been dashed. The U.S. imports more food, consumer electronics, cars and trucks and heavy machinery than ever and that’s unlikely to change anytime soon.

According to the Bureau of Economic Analysis (BEA), the US trade deficit in goods hit a record high of $891.3 billion at the end of 2018:

Large trade deficits like this aren’t a new trend, but since consumer goods are mostly manufactured overseas, Jeffry Bartash thinks this protectionism-influenced deficit is here to stay.

Despite Trade War Tariffs – US Economy is “Net Loser”

With the trade deficit widening at a record pace, and only a minor correction from trade war tariffs, the US economy is likely to suffer.

In fact, according to two recent studies reported by Newsmax, consumers could be footing a bill in the billions (emphasis ours):

In two separate papers published over the weekend, some of the world’s leading trade economists declared Trump’s tariffs to be the most consequential trade experiment seen since the 1930 Smoot-Hawley tariffs blamed for worsening the Great Depression. They also found the initial cost of Trump’s duties to the U.S. economy was in the billions and being borne largely by American consumers.

It may be reported that “China is paying the tariffs,” but these recent papers suggest otherwise. According to the analysis of import price data by Mary Amiti, Stephen Redding and David Weinstein, almost all of the cost of the tariffs was being paid by U.S. consumers and companies.

It’s tough to say the tariffs are a “win” for the U.S. economy if this is the case, especially when combined with the new record trade deficit in goods.

Slapping tariffs on Chinese imports isn’t helping the U.S. economy. Protectionist monetary policies like trade tariffs are more of a “band aid” than a long-term solution for trade deficit and other economic woes.

They usually end up harming consumers in the form of higher prices and production shortages. As the economy shrinks, and workers get pulled from other sectors, monetary policies like these can backfire.

And with the record U.S. “vice” for imported goods, the situation could end up widening the trade deficit to catastrophic levels.

The trade deficit could have a negative influence on unprepared portfolios. Your retirement doesn’t have to suffer the consequences. Consider preparing your portfolio with diversified assets known for preserving purchasing power such as physical gold and silver.