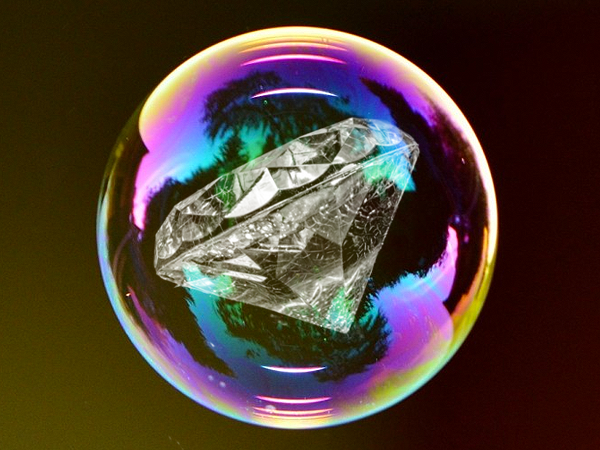 There have been numerous signs that the U.S. is likely to go through another major recession at some point. And regardless of when or if a recession happens, it won’t change the fact that the U.S. economy is already in hot water.

At MarketWatch, the “hot water” is explained in terms of a U.S. “wealth bubble” that reveals a peculiar pattern:

Today the United States sits in the midst of the largest wealth bubble in post-World War II history, as measured by household net worth (or wealth) relative to gross domestic product. As I showed in detail recently in the Journal of Business Economics, only two other postwar bubbles come close, with peaks in 1999 and 2006, just prior to the tech stock crash and the Great Recession.

The largest wealth bubble (household net worth relative to GDP) is shown in a chart from the same article. (Shaded areas are recessions): 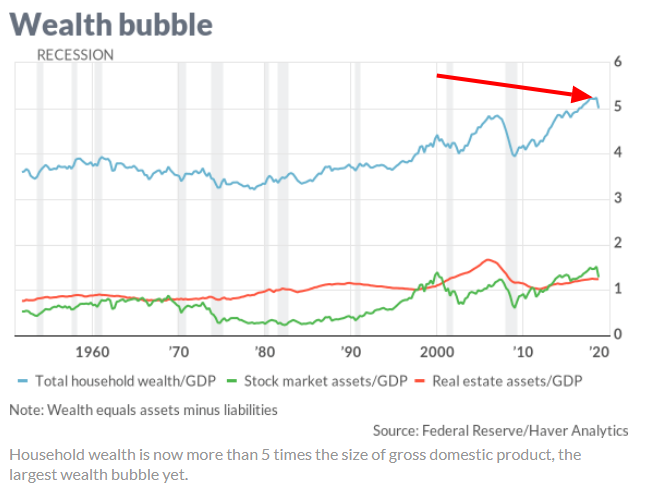 As you can see at the bottom, the wealth bubble is “5 times the size” of the GDP.

But notice how the wealth bubble “pops” just before the 2000 and 2008 recessions. If you look at the end of the blue line, it appears the largest wealth bubble since World War II may already be popping.

Also notice how the green line dips before the 2000 tech stock “recession,” and the red line before the 2008 recession (caused mainly by subprime mortgages).

But according to the MarketWatch report, there’s another crucial detail to point out:

In both prior bubbles, the crashes led to a drop in the value of net worth to about 4 times GDP. Even that level remained high relative to prior history, since in no single quarter before 1998 had the household net worth-to-GDP ratio ever reached 4.0 or higher.

With that being said, according to the chart above:

The wealth bubble got increasingly larger before two prior recessions. It’s at its largest right now, and no “net worth to GDP” ratio has been higher before 1998.

While we can’t be certain the U.S. is heading for a recession based on this “net worth to GDP ratio” signal alone, there’s no doubt the economy is in uncharted territory now.

This means, anything can happen.

The Bigger the “Wealth Bubble” is, the Harder it May Fall

By trying to limit wealth downturns, policymakers and the Fed may have opened up a new “can of worms” in terms of risk.

Financial experts Robert C. Merton and Zvi Bodie explain this in a passage from a book titled The Global Financial System: A Functional Perspective…

Similarly, well-intentioned government policies aimed at reducing the systemic risks of a crisis in the global financial system may have the unintended and perverse consequence of actually increasing the risk of such a crisis.

Simply put, this doesn’t mean past interventions by policymakers were “wrong” or “right.” But it does mean those interventions grew the U.S. household net worth to five times GDP.

So policymakers like the Fed may have actually created a monster.

At that record height, any crash “down” to 4 times GDP has farther to fall, and would remove up to 20% of net-wealth from the market. And it can get worse…

According to economist Eugene Steuerle, it may become harder to diversify because the current “wealth bubble” transcends multiple asset classes.

This means, while “much of the 1970s saw stock declines as real estate rose relative to GDP, and the 1980s saw the reverse,” Steuerle suggests our current bubble could affect rate of return for almost all markets.

If that happens, safe haven options could become severely limited.

Don’t Wait to Load Up on Safe Haven Options

The tech crash of 2000 and the Great Recession of 2008 may have happened in the past, but the same insane behaviors are still holding the economic “steering wheel.”

Debt is still spinning out of control, the dollar is still weakening, and it could make diversifying your assets tougher in the future. Even if a recession doesn’t happen in the near future, you don’t want to wait to load up on safe havens assets.

Diversifying your portfolio with safe haven assets like precious metals that are known to be a hedge and source of protection for your wealth, including against popping “bubbles,” can lessen your risk of being exposed.

The best time to prepare for an emergency is before. When this wealth bubble “pops”, you won’t want your savings to be left unprotected.