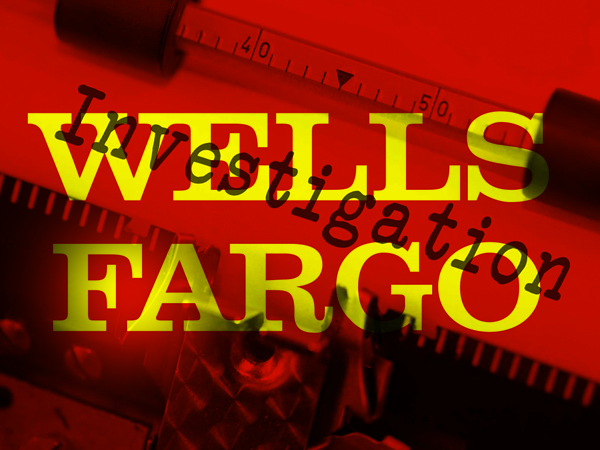 It might be time to start evaluating whether major banks are the right place to keep your money. Why, you might ask?

Another big bank, Wells Fargo, is getting investigated… again. And this bank is no stranger to unethical practices…

A 2016 “fake accounts scandals” and payment of a $1 billion fine for auto and mortgage loan abuses put them under scrutiny by the feds, and according to an L.A. Times report, they were willing to falsify records and terminate a whistleblower:

A former Wells Fargo mortgage banker who worked in Beverly Hills alleged in a lawsuit this week that the bank falsified records so it could blame holdups on borrowers — and that it fired him for trying to report the practice.

Now, they are being investigated by the U.S. Labor Department for unethical (maybe even illegal) 401(k) practices.

According to a report at CNBC by Kate Rooney, they’ve been reportedly pushing upgraded IRA plans to lower-tier 401(k) clients and funds managed by Wells Fargo:

The department reportedly launched a probe into whether the bank is encouraging people to change from lower-cost 401(k) plans to more costly individual retirement accounts, the Journal said, citing a person familiar with the inquiry.

The investigation also explores whether the bank’s retirement unit pushed customers to opt into funds managed by Wells Fargo, which would mean more revenue for the bank, according to the report.

It’s obvious Wells Fargo, who has switched a good portion of top management and their board of directors, hasn’t learned their lesson.

Plus, not a single executive has been rightly reprimanded yet.

In light of the recent probe initiated by the Labor Department, Wells Fargo’s PR department has kicked into overdrive, sneaking an “explanation” into their quarterly financial report:

A review of certain activities within Wealth and Investment Management (WIM) being conducted by the Board, in response to inquiries from federal government agencies, is assessing whether there have been inappropriate referrals or recommendations, including with respect to rollovers for 401(k) plan participants, certain alternative investments, or referrals of brokerage customers to the Company’s investment and fiduciary services business.

This blasé attempt to explain their position with little to no accountability seems to be par for the course at the bank. For example, pick any of the recent scandals that Wells Fargo is involved in. Any one of them should have resulted in severe consequences beyond a single fine and some loan restrictions.

But, nope. Not a single executive has been severely disciplined. The one most under-scrutiny landed a $67 million severance package before leaving in 2016.

The current CEO also inked a 35% pay increase amid lowering stock prices and poor performance across the board.

But don’t pull your money out of Wells Fargo and open an account at another major bank just yet.

JP Morgan Chase is involved in many of the tens of thousands of legal proceedings it was involved with back in 2011. Many for unethical practices on par with robo-signing foreclosure notices without investigating underlying circumstances.

Chase has also been hit with a $1.42 billion fine of its own from a 2008 lawsuit involving Lehman Bros.

And the FDIC is suing Bank of America for underreporting a key metric that would have altered the risk level for the bank. The bank has also been sued for charging unlawful interest rates disguised as overdraft fees on consumer checking accounts.

They’ve even had to pay a whopping $16.65 billion for financial fraud leading up to the 2008 banking crisis. Straight from the Justice Dept:

“At nearly $17 billion, today’s resolution with Bank of America is the largest the department has ever reached with a single entity in American history,” said Associate Attorney General West. “But the significance of this settlement lies not just in its size; this agreement is notable because it achieves real accountability for the American people and helps to rectify the harm caused by Bank of America’s conduct through a $7 billion consumer relief package that could benefit hundreds of thousands of Americans still struggling to pull themselves out from under the weight of the financial crisis.”

And every single state in the Union is involved, with each Attorney General investigating shady mortgage practices at large banks.

Yet We Keep Giving “Big Banks” Our Money…

If you robbed a bank, you’d be wearing orange for a 10-20 year stint. But if a big bank robs you, it seems like they get off scot-free.

That, or they ask for a “Big Bailout” and get it — at your expense.

And while it might feel like “going all cash” and moving out to a cabin in the woods could be a solution, a safer and more practical solution is to put some of your wealth into precious metals like gold and silver.

Big Banks are becoming riskier places to hold money, but precious metals are a form of security that could help protect your hard-earned savings and future retirement.