What Economists Say The U.S. GDP Stalling at 2% Means For Retirement Savers 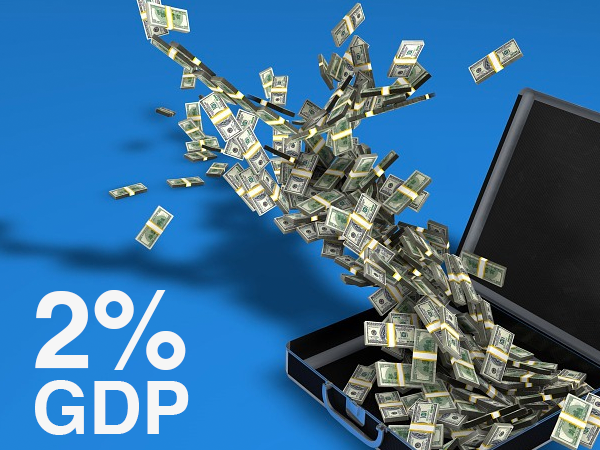 Many investors are alarmed by the latest GDP figures recently released by the U.S. government because the numbers show an economy that’s stagnating. Gross domestic product is considered the “official scorecard” for the U.S. economy, and a leading indicator for predicting the direction of the economy, which is why economists and investors track its performance.

During the second quarter (April-June) the gross domestic product grew at a 2% annual pace, which was the same rate as the first quarter report. Updated figures confirmed this, and this slow growth rate is expected to continue through the end of the year.

The GDP report did include some good news: consumer spending has remained strong, increasing by 4.6% since the spring. The labor market is the strongest it has been in years. Government spending increased by 4.8%, due in part to states and cities investing more in the construction of roads and bridges.

However, on a macro level, the overall statistics show a slowing economy, one that is moving in a direction of slower growth, stagnation, maybe even a decline.

But a strengthening or weakening economy going forward could hinge on two things… two unpredictable events with outcomes that are shrouded in political fog. And each event has a history of contributing to market volatility and economic instability.

Let’s examine each one.

A new round of tariffs on Chinese imports kicked in September 1st, moving up to 15% in response to China’s additional tariffs on $75 billion of American goods. American farmers, small businesses, and consumers are already feeling the pain.

Right now, there is no end in sight to this trade war.

Many on Wall Street are already concluding the recent trade war escalations between China and the U.S. have put the U.S. economy on the edge of a recession.

Chief economist Seth Carpenter pointed out the direct effect the trade war and resulting tariffs have on U.S. GDP: “Consumption is almost 70 percent of the U.S. economy, so its path largely determines the path of GDP.”

Morgan Stanley equity strategist Michael Wilson agrees, pointing out the inevitable impact the tariffs will continue to make as businesses are forced to pass along their higher costs to consumers.

And Swiss bank UBS is forecasting a drop in U.S. gross domestic product, slipping to 1.8 percent in the fourth quarter, then slowing to 0.5 percent in the first quarter of 2020, then 0.3 percent in the second quarter. This is when the recent round of tariffs will hit consumers in the pocketbook.

If that isn’t unstable enough, there is another event investors should be keeping an eye on…

Democrats have been threatening impeachment for more than two years. But the recent announcement by Speaker Pelosi that an impeachment probe would begin seemed to initially rattle the stock market as equities headed to session lows the day after the announcement.

Market gyrations have continued as breaking news develops. When Trump tweeted that he would be releasing the transcript of his phone call with President Zelensky of Ukraine, some stock losses were briefly trimmed.

What’s interesting is to compare how the Mueller investigation had almost zero effect on the market. So what is the difference between the Mueller probe and this impeachment inquiry?

One difference is that House Democrats appear to have the momentum to begin proceedings. And there is a big difference between an investigation and impeachment proceedings. Secondly, the robust economy has begun to wane and some are forecasting an end of the lengthy economic expansion. And the U.S.-China trade war is having a real impact on the economy, more negative than positive at this point.

However, when you ask a money manager how much the impeachment proceedings could impact the economy, you get different answers.

Here are a few examples…

“To the extent that President Trump is impeached, but not removed from office we believe the market will completely look past all of these political headlines… You could make an argument he (Trump) might be more likely to do a deal with China to get the economy going again.” -Chris Zaccarelli, chief investment officer of the Independent Advisor Alliance

“What these impeachment proceedings will mean for the market in the long term is very hard to diagnose, but it is certain that the proceedings will lead to a higher degree of volatility.” -Dom Catrambone, CEO of Volshares Large Cap ETF

“We have had an extensive period of a lot of volatility. I think it is not productive, all this uncertainty. Uncertainty is not good for the stock market, and people are trying to figure out where they can hide.” -Thyra Zerhusen, Chief Investment Officer of Fairpointe Capital

Wrapping Up: Which Event is More Likely to Drag Down the Economy?

An impeachment inquiry and the U.S-China trade war both pose significant threats of instability to the U.S. economy. But Wall Street doesn’t view them as equally disruptive.

Wall Street is clearly more concerned about the trade war and its potential impact.

“The weekend talk shows were consumed with the impeachment deal, and it doesn’t seem to have a major market impact,” said Art Cashin, Director of UBS floor operations at the NYSE. “The key that remains all encompassing is the China trade.”

With these two events underway, the next few quarterly reports on GDP performance will be interesting, indeed.