What Happens If U.S. Loses Game of Trade War “Chicken” 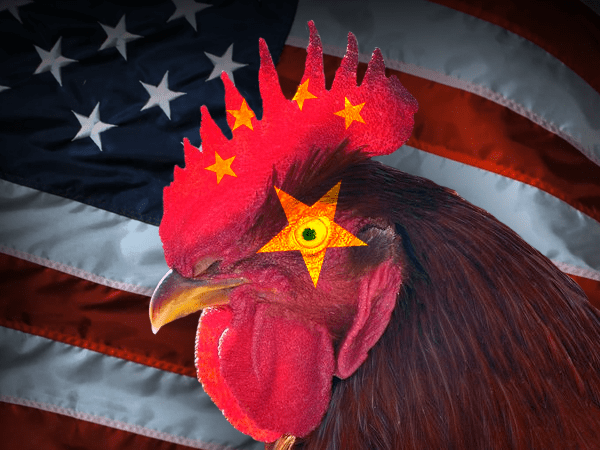 Trading “tariff shots” with an adversary like China has consequences. If the U.S. loses the trade war it could be dire for the economy.

Here’s why that just may happen…

A ship called the Peak Pegasus, loaded with U.S. soybeans, was trying to reach its Chinese port before a tariff deadline went into effect on Friday. Unfortunately, it was a few minutes too late. It missed the deadline — triggering the new tariffs on the soybeans it was carrying.

Washington DC is serious about its negotiating position, essentially playing trade war “chicken” by threatening a potential $500 billion in additional tariffs if China doesn’t back down.

And according to a report at The New Republic, the Administration also appears to be bringing a butter knife to a negotiation that requires surgical precision:

It’s unclear what this trade war is meant to accomplish—or what the Trump administration would ask for if China and the United States were to agree to come to the negotiating table. Instead, the administration has entered into a high-stakes gambit with neither a strategy nor an off-ramp in sight for either nation, which has turned the standoff into a microcosm of the administration’s blunt, simplistic approach to policy. In this case, it’s one that could easily backfire.

China has always wielded an economic “Sword of Damocles” over the U.S. when it comes to many large companies’ intellectual property (IP).

Wells Fargo summarized the trade war game of “chicken” in a CNBC report, stating that Beijing doesn’t want to continue the trade war, but will respond if necessary.

They also stated the risk remains “contained” as long as the Administration doesn’t move to protectionist policies (emphasis ours):

These risks to remain contained so long as tariffs imposed by the U.S. are used as precisely targeted instruments of negotiation and not blunt tools of protectionism… Policymakers in Beijing have signaled their desire to avoid a trade war, yet are willing to respond to tariffs and restrictive policies in a one-for-one, like kind manner.

It looks like we may be moving past “tit for tat” and into the feared “blunt protectionism” identified by Wells Fargo. And this “blunt” behavior is how the U.S. could lose the game.

The Costs of Moving from Frustration to Blunt Protectionism

It seems like the Administration is frustrated with the pace of negotiation. As a result, they’ve been bluntly ignoring the WTO, which has had an 80% success rate negotiating trade deals. Overconfidence in economic “tit for tat” and the supposed “fear” it will place on China may just backfire.

And that seems to be the substance of the strategy going into these trade wars, a “tit for tat” exchange designed to get China back to the table.

The exchange thus far has been summarized nicely by the Wells Fargo Investment Institute (see graphic):

This begs the question, when does the administration reach a tipping point and escalate this conflict to the next level?

It’s bound to happen, and the costs of blunt protectionism as a next step is a big gamble with consumer livelihoods.

It results in higher prices on imported goods, uncertainty in the markets and most importantly… it can extend the severity of any future market correction.

After all, protectionist policies like these greatly extended an already-severe Great Depression in 1929-1932.

The Catalyst for Gold’s Next Boom Lies Elsewhere

But the secret to gold’s next boom might just lie in other countries. According to Samuel Paelez, Chief Investment Officer with Galileo Global Equity Advisors from an interview at Streetwise Reports:

The U.S. is a major producer of gold, but so is Canada, Australia, South Africa and many other countries around the world. The miners that have high exposure to countries like Canada and Australia are not seeing the economics of their mines negatively impacted by gold dropping. If anything, in some cases, like in Canada for example, gold is actually up year to date in Canadian dollar terms.

And as we’ve reported before, China is gaining influence in the gold market as it looks for ways to reduce its exposure to U.S. debt in addition to possible trade war escalation. This is sure to influence gold’s price positively.

So take this rare opportunity to prepare your portfolio for the blunt (and costly) trade instrument that are being wielded in the trade wars.