Home » Blog » Why Dollar Dominance Drops to Lowest Mark Since 2013

Why Dollar Dominance Drops to Lowest Mark Since 2013 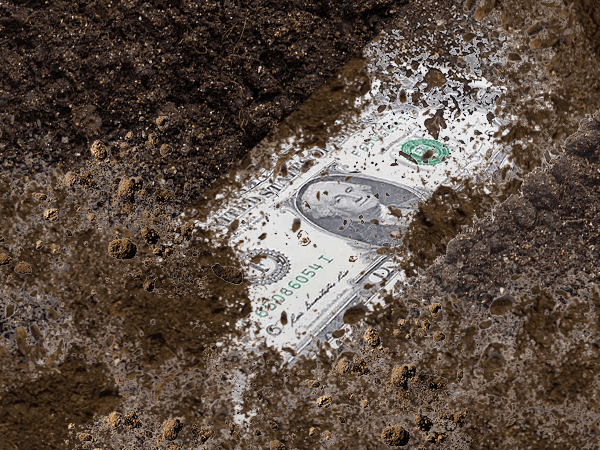 According to the IMF, the U.S. dollar is known as the “Global Reserve Currency”. There are a number of reasons for this, but mainly because it’s backed by the U.S. economy.

That economy is fraught with uncertainty at the moment. But that isn’t the only issue plaguing the U.S. dollar’s dominance in the global markets.

Wolf Richter writes that the U.S. dollar’s status as reserve currency is dipping to levels not seen since 2013:

But the amount of USD-denominated exchange reserves ticked down to $6.62 trillion, and the dollar’s share of global foreign exchanges reserves dropped to 61.7%, the lowest since 2013.

As you can see from the chart below, the U.S. dollar may have been slowly losing steam since 2001 with the arrival of the euro (source): 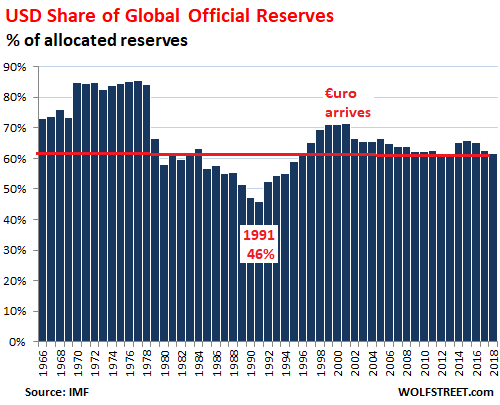 But perhaps more alarming is the dollar seems to be slipping down towards 1991 levels, where according to the same chart, it accounted for only 46% of the global reserve.

If the dollar keeps dropping, that could severely impact purchasing power and, under current market tensions, possibly drive inflation out of control.

The Dollar’s “Doldrums” Could Trigger Even More Uncertainty

The Balance explained in a recent article how a decline in the U.S. dollar typically happens:

The U.S. dollar declines when the dollar’s value is lower compared to other currencies in the foreign exchange market. It means the dollar index falls.

But the dollar index (DXY) isn’t declining, at least for the moment. It has remained fairly steady since June 2018 after recovering from a loss of over 4% in January.

However, the same article reminds us of another key reason the dollar declined in 2009 (emphasis ours):

In March 2009, the dollar resumed its decline thanks to the now $20 trillion U.S. debt. Creditor nations, like China and Japan, worry the U.S. government won’t support the value of a dollar.

In addition to tensions caused by skyrocketing U.S. debt, a massive trade deficit has been enabled by the dollar’s strength according to Wolf:

The fact that the dollar is the largest reserve currency and largest international funding currency allows the US to easily fund those massive trade deficits, which has made the trade deficits possible over the past two decades.

The official U.S. trade deficit ballooned to almost $60 billion at the end of 2018. With the recent tariffs placed on China, the “solutions” offered to close down the deficit appear short-term.

If the dollar doldrums do continue, don’t count on a smooth ride in 2019.

The dollar’s grasp on its status of global reserve currency continues to slip away. It could start dancing nervously if geopolitical tensions increase from the next wild POTUS announcement.

The bottom line is, anything can happen as the World pushes away from the dollar and the economic outlook remains uncertain. So what can you do?

Corporate – inflated stocks carry downside risk. Even bonds and Treasuries aren’t a guaranteed hedge. But precious metals like gold and silver have been historically proven to do well when the dollar doesn’t.

Whatever you choose to do, it’s better to be prepared than left behind.