Home » Blog » The Shocking Reason Why Turkey Is Gobbling Up Gold

The Shocking Reason Why Turkey Is Gobbling Up Gold 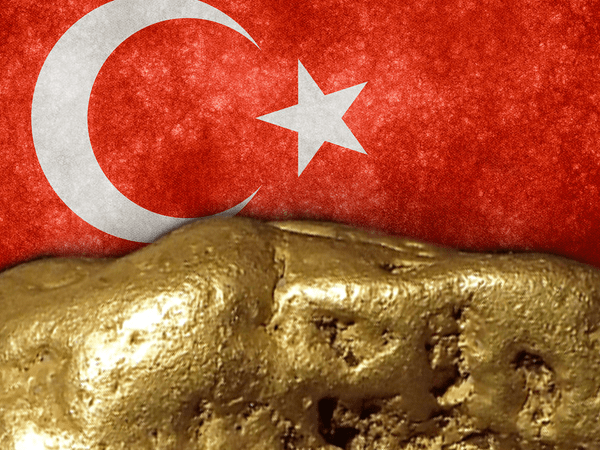 Recent investment statistics have revealed that the Turks are buying more gold than ever before. As the graph below shows, they imported more than a staggering $16 billion of the yellow metal in September alone. 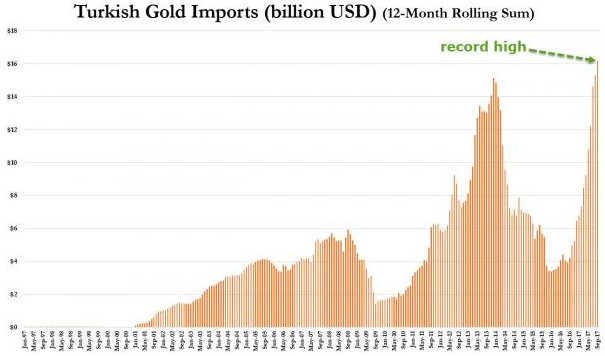 This gold-buying frenzy is further highlighted by their bar and coin purchases — a proven measure of investment demand.

As the below Bloomberg chart from Zero Hedge reveals, a report published last Thursday from the World Gold Council showed Turks more than tripled such purchases from 14.8 metric tons this time last year, to 47 tons this year for the same period.

However, this Turkish gold rush isn’t limited to the average Turk. The country’s central bank is also getting in on the action. As another Zero Hedge graph below shows, it’s increased gold purchases by 30.4 tons during the third quarter alone. 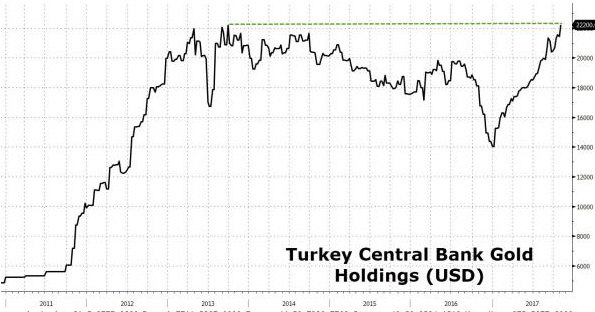 And as you can see in the following graph, the Turkish lira has heavily increased its gold investments in the last two years. 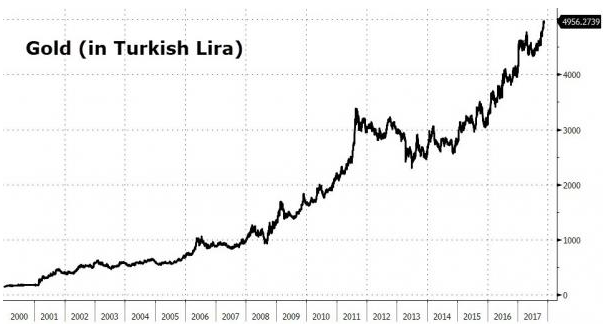 So, why has gold become the Turks’ favorite investment choice all of a sudden?

Preparing for the Inevitable

With both domestic and international political tensions rising, an economic crisis in Turkey could be just around the corner.

Turkey is by far and away the country we are most worried about. Turkey looks to us like an accident waiting to happen.

The country’s opposition is calling for the resignation of prime minister Binali Yildirim. This is in light of the recent Paradise Paper, released by the International Consortium of Investigative Journalists (ICIJ), which showed his sons were involved in a sophisticated offshore tax-dodging scandal.

The country could also be hit with billions in U.S. fines for violating its sanctions on Iran. Not to mention the price of oil, which Turkey imports to fuel its economy, is reaching a two-year high. This, together with a construction boom, means its economy’s foundation is becoming increasingly shaky.

Turkey’s currency, the lira, is suffering too. It has dropped by nearly 15 percent against the dollar since September. Meanwhile, bond yields have reached record highs at around 12 percent. In response, Turkey’s central bank was forced to raise its year-end inflation forecast to 9.8 percent.

This is an economic time bomb waiting to go off, as McNamara also told Haaretz:

So, lots of foreign debt – tick; current account – tick; property boom – tick, politics – tick. You go through the list and it’s a recipe for trouble.

And this economic crisis is expected to come soon as McNamara continued:

High inflation in Turkey and a surge in foreign borrowing by its banks could plunge the country into crisis as soon as next year.

Are Rising Tensions to Blame?

Although Turkey’s central bank says that its rampant gold hoarding is all part of its diversification policy, some analysts believe otherwise. They see it as a sign that the Turks are preparing themselves for an escalation in tensions with their Western allies.

This speculation has been fueled by Erdogan’s comments last year, when he urged both Turks and the central bank to invest in gold instead of the U.S. dollar.

Whatever the cause, the Turks’ rush to stockpile as much gold reserves as possible is a wise investment. They know it’s the safest and most proven way to protect wealth when tough times are ahead.

And with analysts predicting the U.S. economy could soon take a turn for the worse, it would be a good idea for investors back home to do the same.