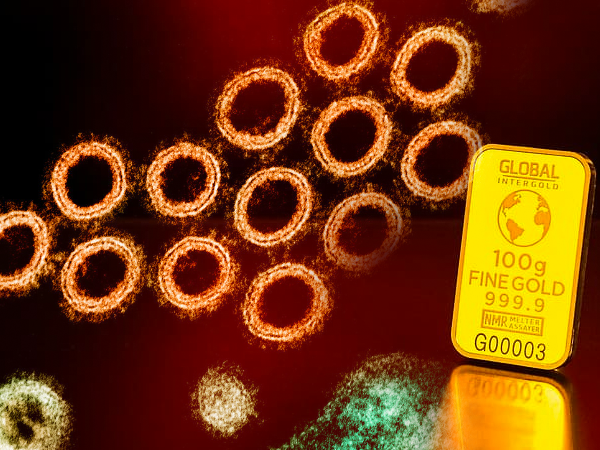 This week, Your News to Know rounds up the latest top stories involving gold and the overall economy. Stories include: Why the coronavirus outbreak could be the catalyst for gold’s next breakout, analyst says gold is getting ready to breach $1,800, and hoard of Iron Age coins found in Britain declared a treasure.

Even before the coronavirus pandemic, gold had been posting its best performance in seven years riding on a multitude of strong drivers. Among them was a turn towards loose monetary policy by the Federal Reserve (followed by other central banks around the world), which solidified gold’s spot above the all-important $1,500 level.

According to FX Empire’s Arkadiusz Sieron, the Fed’s triple rate cut in 2019 came as a direct response to recessionary concerns after the Treasury yield curve had inverted. Mere months after an apparent normalization, however, the spread between 10-year and 3-month Treasuries went negative at the end of January, marking the second inversion in less than a year.

The dip into negative territory quickly sent gold to $1,580, and the metal has stuck to these levels, even two weeks after the yield curve went back into the green. Sieron thinks that another inversion is on the way, and that fears over a domestic recession could be significantly bolstered by the coronavirus outbreak.

Thus far, the outbreak is looking like a more dangerous version of the SARS epidemic, which claimed $40 billion from the global economy and sent investors flocking to haven assets. Yet the global economy of today has been contracting for a while, and gold is now one of the few viable safe-haven options available in the wake of negative-yielding bonds. In contrast to 2019, the latest yield curve inversion comes as a result of the shrinking 10-year Treasury yield, leading Sieron to believe that the coronavirus pandemic could aggravate existing concerns over global growth and act as the catalyst for the next breakout in the gold market.

Analyst: Gold is wrapping up its sideways price action and preparing to move to $1,800

Gold prices have been moving in a mostly sideways manner ever since the metal established itself above last year’s high of $1,553 an ounce. And while some analysts view this form of price action bullish enough on its own, one firm believes that gold is nearly done lingering around seven-year highs and is getting ready for a jump of roughly 15%.

As Florian Grummes, a market analyst at Midas Touch Consulting, noted in a report published last Wednesday, gold appears to be building up momentum as prices bounce between $1,535 and $1,600. Despite gold’s outstanding performance in 2019, Grummes believes that the true fireworks are yet to come, and that a stable move past $1,600 will be the likeliest trigger. Grummes also notes that bullish sentiment has paved the way for some very exciting action in the market.

“Every dip is quickly being bought and the surprises are always happening to the upside,” he said. “Even though gold has already increased by over US$450 from the low at US$1,160 in August 2018, the bulls remain in control and are not showing any weakness.”

While the $1,600 level has undeniable psychological importance, Grummes said that a straightforward move towards $1,800 could happen as soon as gold establishes support above $1,590. In line with the strength that the market has shown for nearly a year, Grummes added that a near-term pullback below $1,550 is highly unlikely.

Archeologists have unearthed a treasure of Iron Age gold coins in Suffolk, England

While stashes of ancient gold coins are always an exceedingly valuable find, the peculiarities surrounding the 19-coin hoard from Suffolk, England found in February 2019 have led archeologists to dub the find a treasure.

The coins were found in an area near Blythburgh within a square of roughly 32 to 49 feet by a metal detectorist. It didn’t take long for experts to realize that the find was of exceptional value, sporting an unusual mix of rare gold coins minted during the Iron Age.

According to Suffolk coroner Nigel Parsley, some of the coins featured designs traditionally associated with the region. However, several coins stood out, such as the gold staters and quarter staters attributed to a pre-Roman tribal leader called Addedomaros, King of Trinovantes.

Archaeologist Dr. Anna Booth said that these coins are not commonly found in Suffolk but are rather associated with neighboring regions. Furthermore, Booth said that the hoard contained a previously-unseen coin, a few rare flower designs and two unusual pieces with a reverse S-shape.

Booth added that the coins, which are mostly dated to 45-25 B.C. and are thought to have been deposited around A.D. 20, have accrued a great deal of interest from various museums.