Home » Blog » Billionaire Investor: “You’ve Got to be in These Precious Metals” 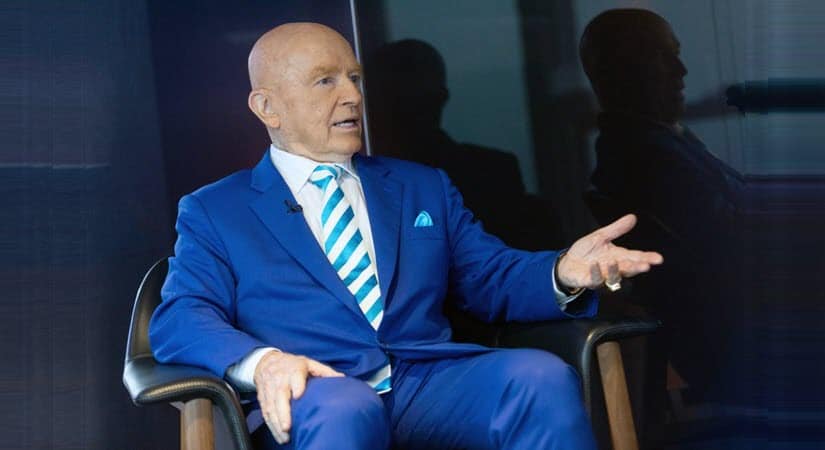 This week, Your News to Know rounds up the latest top stories involving gold and the overall economy. Stories include: Why investors need to be in precious metals, gold’s true breakout is coming, and the price-positive implications of gold and silver’s supply side.

At a time when gold is facing downwards pressure from elevated interest rates, one veteran investor isn’t particularly concerned about the sector’s outlook and believes investors should look at each of the four precious metals. Mark Mobius, executive chairman of Templeton Emerging Markets Group and founder of Mobius Capital Partners, noted that the significance of rising yields on Treasuries is being overplayed by market participants.

As Mobius explained, a below-2% yield on 10-year Treasuries is unlikely to attract many investors, especially in the current climate of eroding faith in central banks and the currencies they issue. The billionaire investor sees exposure to metals as a necessity, stating that they represent an alternative and safer form of currency.

While Mobius places heavy focus on gold, he also points to silver, platinum and palladium as sources of diversification and gains. Gold might have seen little action over the past few weeks due to higher interest rates, but analysts believe that the Federal Reserve won’t hike again for the next couple of years. Plenty has been said about silver’s bullish prospects due to both investment and manufacturing demand, but platinum and palladium are likewise flashing some green signals.

Platinum, which has struggled to break out in recent times, could also benefit from a manufacturing recovery in a manner similar to that of silver. The recent announcement by Russian mining giant Nornickel that platinum production is expected to fall by 710,000 ounces could play heavily into this. Palladium, which has been a consistent outperformer in the sector with a 13% increase last year, should also benefit from supply issues that are perhaps greater than those of both silver and platinum.

Get ready for a lengthy bullish era in the gold market

For most investors, barring those with a narrow short-term speculative focus, moving into gold is oftentimes best done when sentiment is tempered. Not too long before gold hit its $2,070 high in August, fund holdings sat near all-time lows, and bearish positioning was the norm before central banks began slicing interest rates in mid-2019.

When one closely examines what’s subduing gold’s price right now, it quickly becomes apparent that the headwinds are nothing if not flimsy and that the metal’s outlook is exceedingly optimistic. Those who pay excessive attention to interest rate changes seem to have forgotten that the current 1.7% yield is about as high as the Federal Reserve can afford due to mounting debt and deficit.

With the national debt forecasted to climb to $30 trillion by the end of Q1, any significant rise in interest rates would quickly make the U.S. insolvent and force it to print massive amounts of money, which is already being done in full force. While the Fed is unlikely to ever publicly admit to it, their only solution for the debt issue is to subdue rates and let inflation run rampant.

There might be plenty of investors currently chasing risk-on assets, but there are just as many who are aware of the bubbles in them along with the ongoing currency debasement. The bloated stock market is only being prevented from imploding by hard-capped interest rates, and Fed officials are well-aware of this.

With these factors, any investor with a data-oriented long-term view understands that a scenario of a booming economy isn’t likely. What’s left is a global economy that is marked by all-time high speculation, historic inflation expectations and piling debt. Regardless of what yesterday’s trading view might have one believe, each of these points to prolonged outperformance in the gold market.

Because the impact of mine production on gold and silver prices isn’t as easy to gauge as the impact of quantitative easing or interest rate movements, mining productivity remains one of the most overlooked factors when it comes to the metals’ price drivers. Nonetheless, supply and demand have always been a key fundamental, and there are good arguments to believe that changes in mine output played a significant role in price movements over the past few decades.

Most investors know that gold’s price explosion between 1970 and 1980 was tied to the abolishment of the gold standard and the resulting stagflation, but it’s less known that mine supply for gold and silver also dwindled during this period. When gold and silver proceeded to go on a decline until 1998, gold production nearly doubled during the stretch.

Similar scenarios unfolded in subsequent decades. Many are quick to attribute gold’s previous all-time high from 2011 to the economic backdrop, yet it’s worth noting that mining supply began falling in 1998 and bottomed out in 2009. During this stretch, gold prices rose by 650%.

Between 2009 and 2016, gold and silver prices fell by 45% and 72%, respectively, as production recovered. Since 2016, supply has fallen steadily while gold and silver prices rose. This correlation is best exemplified by last year’s pandemic-related mining shutdowns and a subsequent posting of a new all-time high. While none of this shows a direct correlation given that there were other factors at play, 2017 and 2018 appear to provide evidence that gold and silver are indeed highly sensitive to mine output.

During both years, the Fed hiked rates and shrunk its balance sheet, yet gold kept rising in what appeared to be a response to dwindling supply overwhelming front-end headwinds. With mine supply and projections currently as dismal as they have been in some time, it might pay to take a look at simple supply and demand to gauge where the gold and silver prices are headed.