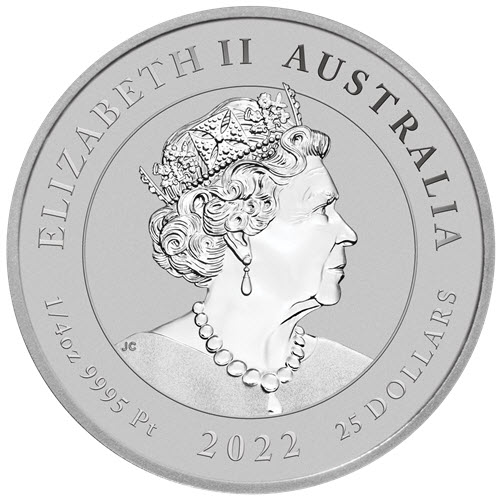 Australia’s legendary Perth Mint has issued yet another commemorative to the original florins struck in 1910, this time, in 1/4 oz 0.9995 pure platinum. This new, fixed mintage issue of a very rare fractional platinum coin is available only to Birch Gold Group customers.
A new coin in Perth Mint’s Australian florin commemorative series! Birch Gold Group brought you the 2 oz silver florin and the 1/4 oz gold florin in 2021 – and now, we are the only company offering the first-ever platinum florin coin in a strictly fixed-mintage release…
Meet the Australian fixed-mintage 1/4 oz platinum florin
The platinum florin’s reverse features the first Australian Commonwealth Coat of Arms. A shield bearing the Cross of St. George and five six-pointed stars, surrounded by six ornamental escutcheons, is supported by a kangaroo on the left and an emu on the right. Above the coat of arms, you’ll note the seven-pointed star symbolizing the Federation – the agreement of the six separate British self-governing colonies of Queensland, New South Wales, Victoria, Tasmania, South Australia, and Western Australia to unite as a single nation. Below the shield, a banner emblazoned with the words ADVANCE AUSTRALIA forms the bottom border of the coin.
What is a florin?
A florin is one of the old English coins you see mentioned in Jane Austen novels or Downton Abbey. It’s one of those odd denominations left over from England’s traditional monetary system (240 pence per pound) that ceased to exist in 1971, when the UK switched from the traditional monetary system to a more rational, decimal-based one (100 pence per pound).
Before 1971, a florin was a coin worth 2 shillings, or 40 pence, or 1/10 pound sterling. Florins were minted in silver from 1849-1919, half-silver from 1920-1946, and mostly copper and nickel after that. (Interestingly, the florin got its name from a Renaissance-era gold coin minted in Florence, the fiorino d’oro, which was globally renowned for its purity and consistency. The Dutch also had a coin called the florin in the 1800s.)
Unfortunately, for fans of unusual coins, the United Kingdom’s transition to a decimalized monetary system meant the end of such strange and lovely denominations as the half crown (2 shillings sixpence) and the double sovereign (£2).
We’re very pleased to be the only authorized distributor of Perth Mint’s homage to the days of yore with this 1/4 oz platinum florin!

See How to Diversify Your Savings with Australian 1/4 oz Platinum Florin
Request a Free Info Kit
By submitting this form, you agree to receive automated text messages. This agreement is not a condition of any purchases. Msg & Data rates may apply. Reply STOP at any time to unsubscribe.