A new report reveals that pension plans in the U.S. are tremendously in debt. Will your funds be there for you when you’re ready to retire? 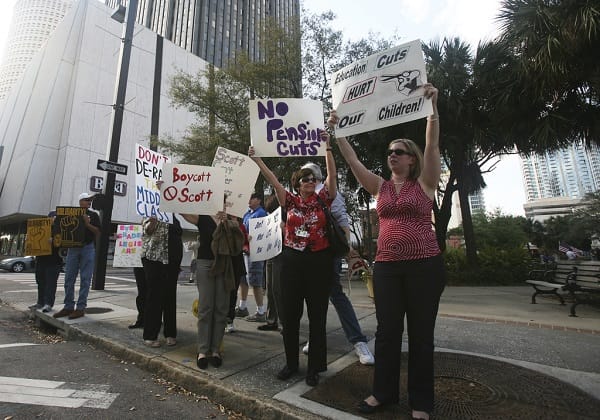 If you are one of those Americans lucky enough to have a pension, a new report reveals that you may want to consider its reliability.

Pew Charitable Trusts has found that states around the nation are nearly a trillion dollars short in pension funding.

There are several factors that go into the calculations for pension funds. One is obvious – the amount of money that a state directly contributes to the pension fund each year. Another important factor is the estimated rate of return on a state’s pension investments. Many states have been overestimating the expected return and shorting their pension contributions annually at the same time. This is a deadly combination and can lead to a fund going bankrupt and not able to pay its obligations.

CNN Money adds that the problem isn’t getting better: “The gap between what states have promised retirees and how much is saved to fund those payments has grown… States are short $968 billion for their pension systems, an increase of $54 billion over the year before. When debts from local programs are taken into account, the total shortfall tops $1 trillion, according to the report. Three states – Illinois, Kentucky and Connecticut – have less than half of their pension programs funded. Illinois is in the hole by more than $100 billion.”

If such a failure happens in the private sector, your pension is guaranteed by the federal Pension Benefit Guarantee Corporation. However, there is no such entity for state workers. Most states consider pensions a state contract and are guaranteed by law. However, bankruptcy judges have been overturning these legal rulings and allowing governments on the municipal level to renege on some of these contracts. Detroit is one example.

“State and local policymakers cannot count on investment returns over the long term to close this gap and instead need to put in place funding policies that put them on track to pay down pension debt,” the report from CNN adds. But do you really want to count on our representatives to be so responsible?

Of course an argument can be made that overly-generous politicians promised state workers the world in order to buy votes in a vicious cycle of corruption. However, that doesn’t really matter. Short of a bankruptcy, the bills have to be paid.

The even bigger problem is that the amount of debt in the United States and even the world is reaching staggering levels that beg the question if these liabilities can be paid at all. The sovereign debt of the U.S. is approaching $20 trillion. Most state governments are massively in debt across the board. Many municipalities are massively under water as well. When you throw in debt for student loans, credit cards, mortgages, etc, the United States is drowning in debt. It’s not an optimistic picture for retirees.

Even though the United States has moved towards defined contribution plans in lieu of defined benefit, there are still millions of Americans who rely on pensions or are counting on this benefit for their retirement.

If you’re one of these millions, what are you to do? You may want to consider moving some of your savings into something that isn’t backed by just a promise from our politicians. We’ve discussed the pitfalls of fiat money and the risk to your money in banks. The pension crisis in America is another reason to put your money into precious metals. Give us a call to find out how to invest a portion of your IRA in gold.

If you are on Google+, be sure to check out are page and follow us here.