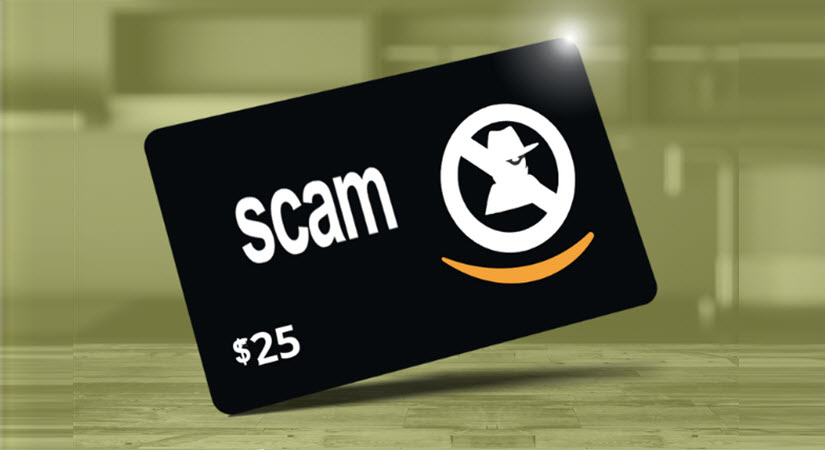 You might think a gift card should be something you just can’t put a negative spin on. While the recipient might not always be perfectly content with the available choice of the store or what can be purchased, gift cards have long served as a ubiquitous token of appreciation. They’re given out of kindness (or kindness mixed with a bit of promotion). Gift cards are a way for aunts and uncles to acknowledge nieces and nephews during holidays, shorthand for, “I don’t quite know what you want so find yourself something you’ll like.” Employers use gift cards because, according to research, employees think gift cards have a higher perceived value than an equivalent cash bonus.

Yet, as is so often the case, scammers have found a way to turn gift cards a weapon to separate their victims from their cash.

Gift cards requested as payment for a scam

A recent survey by AARP, an advocacy group for older Americans, showed that 1 out of 10 people targeted fall victim to gift card scams, and that the sums involved can be significant. A recent BBB study calculated the average amount stolen by a gift card scam is $700.

While it sounds like a low-profit scam, the Federal Trade Commission said that $245 million has been swindled from Americans through this method since 2018. What’s worse, the FTC says that the rate is rising exponentially and that it is one of the most under-reported scams, meaning that the actual figure is likely much higher.

One tragic story from the BBB study:

A Springfield, Missouri, woman in her 80s received a call in November 2020 from someone who claimed to be with Apple and told her that her iCloud storage was compromised. The woman was instructed to buy gift cards in order to protect her data and tell any cashier who questioned the transaction that they were gifts for grandchildren. She subsequently purchased 29 $500 gift cards to Target and Walmart, scratching off the numbers on the back and photographing them with her phone. In total, the woman lost $14,500.

One victim described losing $10,000 in a single instance of gift card fraud, and the familiar elements were there. The scammers reached out with a well-rehearsed procedure, showing that the attackers are orchestrated and have plenty of experience when it comes to momentarily distracting their targets. In this particular instance, the victim was told that her account was hacked and that a gift card will therefore have to be used to facilitate a payment.

The scammers are not only organized, but also quick to cash out on the scam by asking the victim for the number of the loaded-up gift card. It makes for a fraud that is not only difficult to track, but also difficult to prevent due to the variety of gift cards available and the various methods in which scammers attempt to convince their targets to load up the cards.

The most common types of gift card scams

According to the BBB, the most common types of gift card scams include:

The BBB has a very thorough and well-researched report, Why Scammers Love Gift Cards, that has much more detail.

Nonetheless, the AARP is launching a campaign to raise awareness among retailers when it comes to people looking to load up gift cards with large sums of money. Whenever a person requests a gift card with a considerable amount of money attached to it, the retailer should inquire as to the occasion, which should help weed out these kinds of scams fairly easily. As for the targets themselves, the AARP stated that any attempt by a stranger to get one to pay for something, such as a bill or a fee, through a gift card should be considered a scam.

Knowing what to look out for is key to defending against most scams. To help you detect and avoid financial scams, Birch Gold Group has pulled together an extensive resource guide that is now available on our website. The Birch Gold Group Scam Protection Resource Guide helps you identify warning signs and provides you with tips on how to avoid fraud.