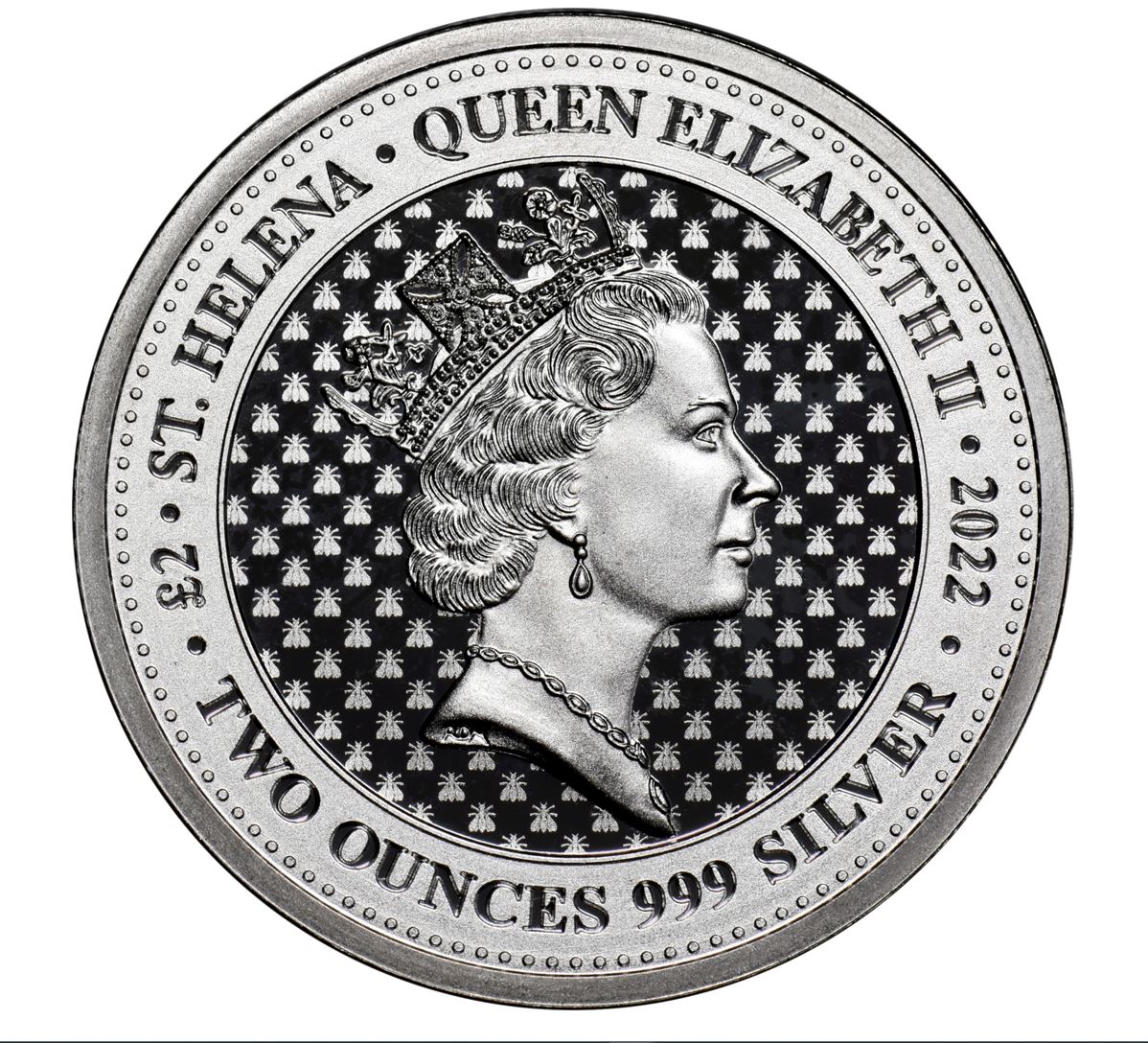 The East India Company and Saint Helena collaborated to bring us this newly-minted 2 oz. silver commemorative coin in honor of Napoleon I. After his defeat by the Duke of Wellington at Waterloo, the man who’d crowned himself emperor died in exile on the island of Saint Helena 200 years ago…

A closer look at the 2 oz Napoleonic bee silver coin

The reverse of the coin features the personal heraldic emblem chosen by Napoleon when he was crowned emperor in 1804, the French honeybee. Why the bee? Napoleon believed symbols were very important – and even though France already had one (the rooster, representing France ever since the Romans called it Gaul), Napoleon believed it was too feeble for his nation.
The honeybee has always been a representation of French industry and was one of the most prominent emblems of the French Revolution. Napoleon himself was sometimes called “the Bee” due to his obsessive work habits and fanatical attention to detail, a nickname he embraced.
The honeybee, symbol of hard work, diligence and orderliness, is surrounded by a garland of laurels – an ancient Greek and Roman symbol of triumph. The design incorporates the crown Pope Pius VII handed to Napoleon during his coronation ceremony at Notre Dame cathedral (the impulsive Napoleon couldn’t wait to be the first Frenchman to hold the title of emperor in a thousand years, so he placed the crown on his own head).
The background of this intricate design is surrounded by a pattern of bees, dark on a light background. The legend reads, “Napoléon Bonaparte” and the motto “1769-1821.” In the coin’s outer circle one of the Emperor’s bees and the East India Company mint mark punctuate the two phrases.
The obverse displays a younger version of Her Majesty Queen Elizabeth II, the “third portrait” by renowned sculptor Raphael Maklouf that appeared on British circulating coins from 1985-1997. Behind the Queen, the background pattern of bees is repeated but in opposite contrast to the reverse, light on a dark background. The obverse legend includes the year of mintage, weight, face value of £2 and purity of 0.999 fine silver.

The Napoleonic Wars, which many historians call “the first world war,”  raged for over a decade between 1803-1815. The French army and their allies fought across Europe, from Portugal to Moscow, Prussia to Egypt, often winning battles against overwhelming odds. Napoleon was crowned emperor, and sought to unite the continent under his rule, dreaming of a new empire as large and long-lasting as Rome’s.
Today, we don’t consider the French a global superpower. Historically, France was one of the greatest military powers of Europe – #1, by many accounts, until the German princedoms, kingdoms, duchies and principalities were unified in 1871. During the Napoleonic wars, the French armies conquered the present-day nations of Italy, Austria, Poland, German States, Holland, Switzerland, Spain, Denmark, and Norway. Napoleon waged over 70 battles, losing only eight of them towards the end.
Ultimately, the French were defeated by Prussian Field Marshal Gebhard Leberecht von Blücher, whose forces occupied Paris. Napoleon abdicated his throne on April 6, 1814 and gave himself up to his enemies to prevent retribution against his nation. He was exiled to Elba, a small island off the coast of Italy. While the victors started to redraw the map of Europe, Napoleon bided his time.
Only nine months later, the French people were angry with their treatment at the hands of the victorious Coalition. Napoleon’s veterans, the Grande Armée, were mistreated. The Coalition nations were exhausted by war, nearly bankrupt and at odds over how to divide the spoils of victory. So Napoleon engineered an escape and landed in France with just 1,000 veterans. He marched across the nation and tens of thousands of his former soldiers flocked to the golden-eagle battle standards of their regiments. The exhausted Coalition declared war once again. For 100 days, Napoleon led France once again, and took to the field to lead his troops against invading British and Prussian armies. They met near a Belgian village called Waterloo, and fought for three consecutive days and, despite winning two battles, Napoleon lost the campaign. He abdicated once again on June 22, 1815.
The Coalition forces had learned their lesson. They couldn’t execute Napoleon (that risked making him a martyr), and they didn’t want him popping up in France again. So they exiled him to Saint Helena in the South Pacific ocean, halfway between Angola and Brazil, 5,000 miles away from Paris. Napoleon died a prisoner in May, 1821.  He was buried under a willow tree in the garden, a simple gravestone marking the spot.
The East India Company, which minted St. Helena’s first coins in 1821 (and actually owned the island), proudly minted this exquisite collectible silver coin 200 years after Napoleon’s death in exile. Let this story remind us of the virtues of industry as well as the dangers of charismatic leaders willing to wage war on the entire world.

The 2022 St. Helena 2 oz silver £2 Napoleonic bee coin is available only to Birch Gold Group customers only as a fixed-mintage product. Choose between home delivery or placement within a Precious Metals IRA.

See How to Diversify Your Savings with Saint Helena 2 oz Silver Napoleon Bee Coin
Request a Free Info Kit
By submitting this form, you agree to receive automated text messages. This agreement is not a condition of any purchases. Msg & Data rates may apply. Reply STOP at any time to unsubscribe.