Home » What is the Gold-to-Silver Ratio?

What is the Gold-to-Silver Ratio?

As simple as it may be, the gold-to-silver ratio is an extremely telling and important indicator in the precious metals world.

Gold and silver are the most popular precious metals for investors. 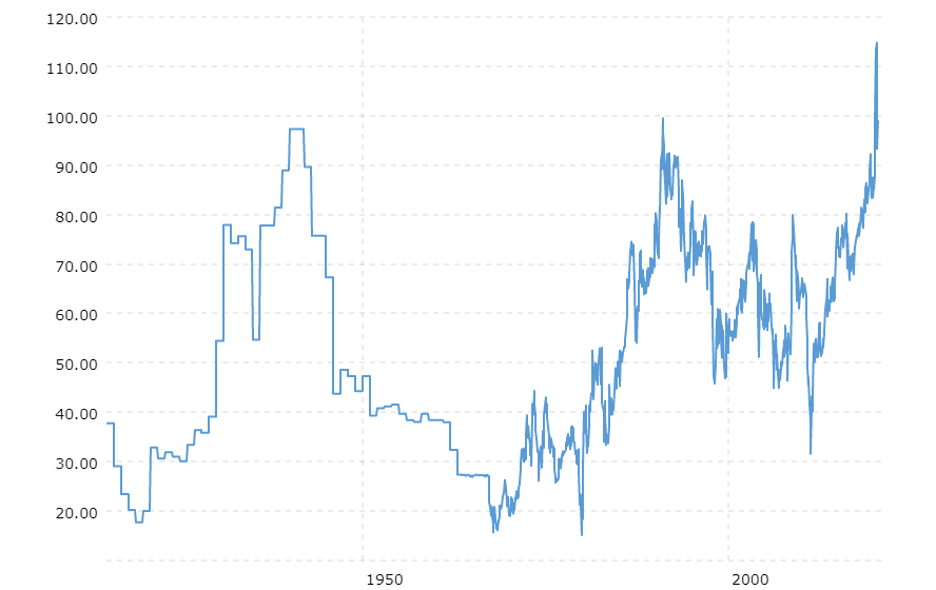 The gold-to-silver ratio is most valuable when it is at extreme values, where it can and has signaled large shifts in both the gold and silver markets—and all the associated industries and economic sectors that contribute to gold and silver’s usage and prices. In fact, it is even used to some degree by equity investors to foretell major shifts in the economy.

To understand this indicator fully, you need to understand how many investors view each of the metals in its equation.

Gold is highly valued because it serves a lot of purposes. While most people are familiar with its use in jewelry, physical gold is also used in electronics and medicine. Gold is also heavily traded and stored as gold coins and bars; in fact, its price is often tied to investor demand.

Silver, on the other hand, operates differently in the eyes of investors. Silver is an investment metal only some of the time; more often, it is viewed as primarily an industrial metal.

So, when economic downturns occur and industry slows down, demand for the much more industrial silver takes a hit. Gold’s characteristic as a hedge against economic slowdowns offers far more to investors—and demand for it may actually increase during such times.

These tendencies in price fluctuation clearly affect the price of each metal. Silver, which lags during the early stages of a recession, sees prices at least fall flat or sometimes even drop as industrial demand is reduced (less production, companies closing, etc.). Gold, however, holds up much better since it is used so essentially to store and protect value.

You can see how the gold-to-silver ratio can bear a clear connection to recessions. As the numerator goes up (gold prices), and the denominator trends sideways-to-down (silver prices), the ratio gets larger.

These trends more than just theory. With gold and silver prices dating back centuries, we can see this in action.

Pivotal Times for the Gold-to-Silver Ratio

The gold-to-silver ratio can tell you a lot of about the state of the economy throughout the years. Revisiting the ratio’s chart above, you can see that the last four peaks occurred during either recessions or periods of great uncertainty in the market.

These are the main peaks worth looking at in the gold-to-silver ratio. Each time you can see why gold as an investment far outweighed silver as an industrial material.

But market technicians and forecasters do use the gold-and-silver ratio for other things than just to look back and see when we had an uncertain marketplace.

Silver may be seen as an industrial metal most of the time, but it is still a precious metal with inherent hedging characteristics of its own. After all, 38% of its demand did come from investments and jewelry last year. During economic downturns, that’s when its investment appeal comes out.

For instance, demand for physical silver more than tripled between 2007 and 2008 just as the rest of the economy was grinding to a halt.

Silver’s worth as an investment might not be apparent immediately. Investors at the start of a downturn seem to turn to gold. In almost every recession over the last several decades, gold’s price increased earlier and faster than silver’s. As you can see in the ratio chart, the peaks came early on or at least trending to the middle of recessions.

But after gold has had time to climb in price for a few months, demand for silver as an investment or hedge increases too. This also likely is due to silver’s relatively low price compared to gold’s, which allows it to be accessible for purchase during a time when people might be otherwise reluctant to spend.

One time we see this mid-recession silver upsurge was in the 2008 demand for silver bars and coins; as a result, silver’s price started taking off halfway through the crisis. But you can see that silver prices hit a multi-year low right in the middle of the recession (marked in gray), just before investors started to turn to it. It’s worth noting that low correlates with the gold-to-silver ratio high. 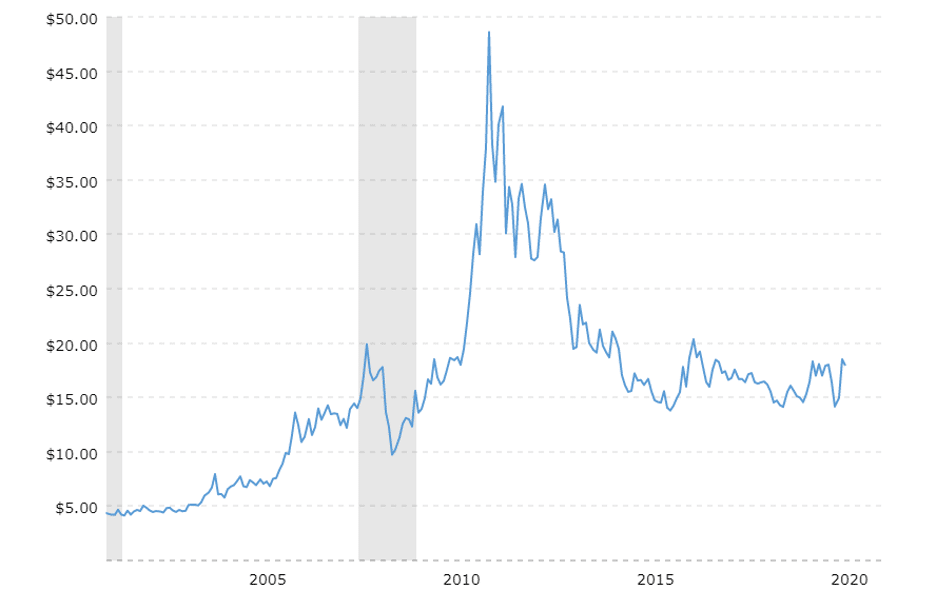 Trends like this one don’t go unnoticed by investors. During the later stages of an economic downturn, silver plays catch up with gold. Often, since its price is already more volatile due to its lower price tag and higher number of uses, that can lead to wild price swings in silver at the tail end and just after recessions.

Following the ‘08-‘09 recession, gold continued to climb toward what became its all-time high, reached in August 2011. The move from the peak of the gold-to-silver ratio in November 2008 until August 2011 represented a move higher of more than 100% for gold. These historic highs generated extensive buzz in the precious metals market and beyond.

Silver, however, actually did far better in this period. Not only was it in high demand for its investment hedging qualities, it was relatively undervalued compared to gold, which had already been going up in price through 2007 and 2008. This led to a rally in silver prices from less than $10 to nearly $50.

As with any market indicator, the gold-to-silver ratio is just a number. It can’t tell the future, particularly given market volatility. And it is only a tool used by those looking to time the market or reallocate their precious metals holdings. So while this price ratio cannot offer investment advice, it does have some unique qualities and a chart history that can offer up some insights into economic performance and potentially even trading opportunities.

You could compare this tool to similar ones like the Dow-to-gold ratio or the gold-to-oil ratio. Each of these offer simple ways to indicate when large shifts are happening in the precious metals world and elsewhere. And watching how precious metal prices perform alongside major currencies like the dollar and the associated financial markets (including the stock market) allows for a more complete economic perspective.

However, the stories told through the gold-to-silver ratio aren’t over. With the highest peak in history coming just in the first few months of 2020, it is definitely one market indicator worth continuing to pay attention to.