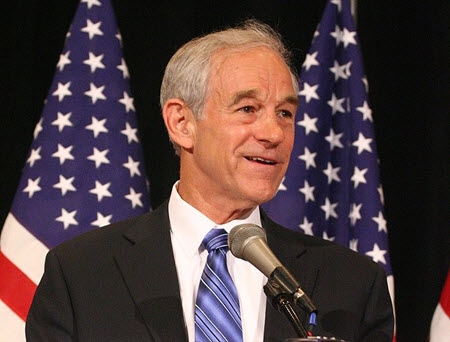 We’re thrilled to announce that Dr. Ron Paul, a longtime advocate of sound money and common-sense economics, has partnered with Birch Gold Group in an effort to educate Americans on gold investment as a way to protect their savings from debasement and currency inflation. Ron Paul has been a vocal advocate for sound money and sensible economic principles for decades. He announced his partnership with Birch Gold Group here.

Who is Ron Paul?

Ron Paul is a medical doctor, a U.S. Air Force veteran, a former Congressman, an author and an educator. He’s written an astonishing 21 books over the decades including the famous titles End the Fed, Gold, Peace and Prosperity and The Case for Gold. Back in 2008, his book The Revolution: A Manifesto galvanized a legion of young, enthusiastic supporters, many of whom had never taken an interest in their freedoms (or even voting) before.

Politically, Ron Paul describes himself as a member of the Libertarian party. In briefest form, libertarians actively support civil liberties and equal rights, geopolitical non-interventionism, laissez-faire capitalism via free markets, and limiting the size and responsibilities of the government. Their platform is best described as “classical liberalism,” as did such visionaries as Adam Smith, Thomas Jefferson, Alexis de Tocqueville and Milton Friedman.

Over the last decade, Ron Paul has focused his energy on educating Americans on the the principles and values of freedom and liberty.

Why is Ron Paul so passionate about gold?

In his classic 1982 book about rational economics, The Case for Gold, Dr. Paul explains very clearly how our current monetary system is failing.

Whenever governments are granted power to purchase their own debt, they never fail to do so, eventually destroying the value of the currency.

He wrote those words in 1982, four decades before Ray Dalio echoed the same thoughts in his best-selling Principles for Dealing with the Changing World Order:

Both men agree: unbacked currencies like the U.S. dollar inevitably fail. Ron Paul understood this four decades ago, and has been warning Americans of the hazards of an unbacked currency ever since.

In an exclusive interview with Birch Gold Group, he spoke about the insidious nature of inflation:

Inflation is the worst tax you can have! If you think you have a million dollars, then you think you know exactly what you have. Inflation, though, is eroding your buying power day after day. Before too long that million dollars just won’t buy as much. Here’s the thing: if the federal government seized half your savings, half all the money in our bank accounts overnight, people would go nuts. They’d be up in arms, rioting in the streets. What they don’t understand is that inflation is doing this all the time, every day, and people just don’t pay attention. Inflation is monetary destruction.

Gold is the traditional safe-haven investment that retains its value despite the inflationary policies of central banks. When we asked Ron Paul why the average American should invest in gold today, he replied:

For the same reasons as the last 5,000 years! Gold is something we’ve always been able to measure wealth with, and to measure economic activity, too. Gold is the unit of account used more than anything else throughout human history. Without a stable unit of account, you get chaos… If money isn’t anchored in something physical, you get inflation. You get malinvestment [bad business investments due to excessive credit and unsustainable increases in money supply]. You get asset bubbles that inevitably implode and destroy people’s lives.

Essentially, Dr. Paul’s case for buying gold comes down to financial stability. “Simply maintaining what you have is a major challenge today,” he said. And that’s exactly what gold is good at.

Recent interviews with Ron Paul on the economy and gold

Ron Paul recently featured Birch Gold Precious Metals Specialist Phillip Patrick, our “in-house economist” on the Ron Paul Liberty Report. In August, Dr. Paul discussed the problems in inflation reporting with Phillip. When are two consecutive quarters of negative GDP growth not a recession? Only in 2022! Why has the Bureau of Labor Statistics (BLS) changed the way they measure inflation so many times since the 1980s? Because the numbers were too high… What happens when you print 300 years worth of dollars in just 24 months? Dr. Paul takes “Modern Monetary Theory” to task. You can watch the full interview here:

In July, Phillip Patrick joined the Ron Paul Liberty Report to discuss the Fed’s so-called “soft landing.” They discussed why the stock market must fall in order for inflation to fall, as well. Does Jerome Powell’s Fed have the fortitude to allow the U.S. economy to fall into recession without pivoting back into quantitative easing? What is a “soft landing,” anyway? Learn more here:

In Dr. Paul’s words, “A lot of people don’t even understand that inflation is a tax on your buying power. If you’re an American with the relatively modest goal of just keeping your money safe, well, I’ve got to warn you, it’s harder today than it’s ever been.”

Phillip Patrick, senior Precious Metals Specialist with Birch, added, “People confuse not having enough buying power with not having enough money. So they want more money, because they can’t pay the grocery bill.”

“I’m a big believer in education,” Dr. Paul said. “Most of my work has been focused on educating Americans on the benefits of liberty and sound money. And Birch Gold believes in education, first and foremost.”

The Birch Gold Group team focuses on education, mostly about the nature of the economic threats facing the average American family today. Gold itself is simple and easy to understand. As Ron Paul wrote on the Birch Gold blog:

An American gold eagle isn’t a promise to pay. It doesn’t come with a 250-page prospectus packed with fine print. You can’t play games with gold. You either own it, or you don’t.

“I’ve been involved in economics, and in helping people protect one another,” Dr. Paul said. “Today it’s important to know what to do with your savings, because it’s harder than ever before! Nobody wants to see their wealth shrink. Simply maintaining what you have is a major challenge today!”

If you want to diversify your savings with an asset that has a 5,000-year track record of wealth preservation, Birch Gold Group can help. This process can be a lot easier than you think, and you can protect your family’s financial future by transferring the dollars you’ve already saved in your IRA or 401(k) into a gold IRA that owns real, physical gold. If you just want to learn more, request a free information kit or call (800) 355-2116 today.