U.S. Mint runs out of gold and silver coins

On the heels of Reddit’s wallstreetbets triumphant (if brief) GameStop frenzy, the day traders searched for a new target. Some have settled on silver. Amid claims that silver’s price should be closer to $1,000 than $25, day traders have flocked to both gold and silver. This made the ongoing supply crunch even worse.

As noted by a retailer of precious metals coins, “There was going to be a backlog in the silver bullion supply chain that rendered silver eagles more scarce either way.” This is because the U.S. Mint is currently changing designs for its American Eagle gold and silver coins, expected to debut this summer. Once available, the U.S. Mint will ration distribution of gold, silver and platinum coins to dealers due to heavy demand.

On the other side of the equation, the U.S. Mint itself has run into problems securing a sufficient number of precious metals blanks for minting into coins, as well as capacity issues in its manufacturing plants.

What does this do the price of available products? Any available silver coins and bars are sold at significantly higher markups over spot price.

Jeff Currie: Silver’s use in solar panels makes it a turbo-charged form of gold

Gold might have seemed like the breakout investment last year to many, but Goldman Sachs’ Jeff Currie thinks silver could wind up outperforming the top performer. Currie explained that silver has plenty more to it than affordability in contrast to gold.

While both metals enjoy similar investment allure, silver has a unique industrial component that could come into special prominence as the bid for green energy strengthens. President Joe Biden’s push for renewable energy has placed the manufacturing component in center stage, with trillions of dollars of stimulus being geared towards a green-friendly infrastructure.

Combined with the U.N.’s own calls for sustainable energy, Currie postulates that silver’s use in solar panels makes the metal a better investment compared to its pricier cousin in the current climate.

Elaborating on silver’s use past a shield from currency debasement, Currie said that “you get that added boost that a lot of that spending … is going to be green [capital expenditures]. That green capex goes into solar panels and then silver is the biggest benefactor.”

While gold remains teetering near its previous all-time high, the squeeze around silver appears to grow tighter by the day. This is especially so as the metal is generally not a primary target as opposed to gold, but rather a byproduct of mining other ore, making silver a tough find on all fronts. 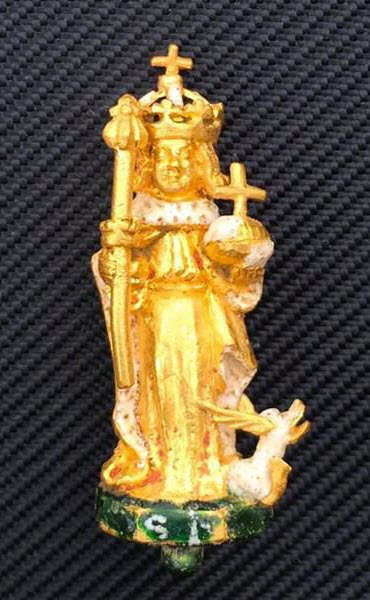 The slew of valuable prospecting finds on English soil continue, as shown by the recent discovery of Henry VIII’s missing crown centerpiece, valued at $2.7 million. Using his metal detector, car restorer and amateur prospector Kevin Duckett stumbled upon what looked to be a piece of foil in rural English fields in 2017.

A dig deeper revealed that the find was not only a chunk of gold, but one of incredible  historical value. Duckett was prospecting near the site of the Battle of Naseby, which hosted a turning point in the nation’s history where Oliver Cromwell’s anti-royalists clashed with Henry VI’s royalist forces, and won decisively.

Finding a missing crown piece would make most prospectors satisfied, but Duckett looked deeper into his excavation. He held onto the missing piece of the crown until last year, when he made the connection to Henry VIII after watching a YouTube documentary on the crown.

Noticing the missing piece, Duckett made the trip to Hampton Court Palace to find a replica of his find, and concluded he had indeed made one of the most remarkable amateur archaeological discoveries of the last decade.

He promptly reached out to the British Museum in London to offer the figurine for evaluation, and theories soon abounded as to how and why the piece was found by an enthusiast from Northamptonshire. Although accounts vary, it appears that Henry VI made it out of the clash safely, but somehow missing the ornamental piece atop his crown. The figure is representative of a centuries-long struggle between monarchs, with some even placing a sort of divine claim on Tudors’ right to reign.

While the find has renewed debates as to what exactly transpired during tumultuous 17th century England, both Duckett and the landowner will likely receive some proceeds of the $2.7 million sale to a museum should the piece prove to be authentic.